It is mid week post Snowmageddon 2016. The trash and recycling haven't been picked up yet. I have no idea when they will be here. The mail finally came and it seems the schools are back in business. NPR says its a record snowfall. We got around 2 feet but other areas got more. I believe it. I beat myself up shoveling Saturday afternoon during the storm. The neighbors and I traded our dinner plans and drink options virtually but none of us braved the elements to each other's homes. I sat on the couch with this furball reading some soon to be discussed material. 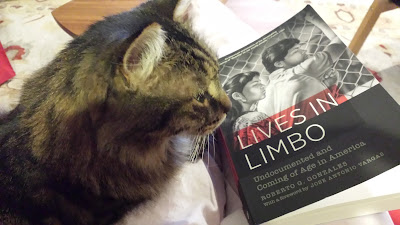 The storm gave way to a glorious morning. I did a swan dive into the snowbank before I shoveled some more. It was fantastic. My 4 year old loved it. He played in the snow while my husband and I dug out.  He was where we left off on the drive way and I started to chip away at the wall of snow from the street.


I call this magnificent scene Exploding Heart because that's exactly what it was for me. It is a park near my home that I normally run. I tromped through un-plowed snow to get to where I normally start. Just think high knees for what seemed like a blasted eternity. I thought frequently that I should turn back. I should note that the logic of, "I'm already in, I can't turn back now" is not sound. I walked a bit but tried to be efficient with the high knees to propel myself forward. Thankfully, I asked friends what they wore on their Sunday arctic tromp. I was grateful for my running tights, tall wool socks and my iPod (so I could feel moderately cool despite the oh shit what have I gotten myself into). I followed the path and veered off to what I thought was where the trail met a path towards a hotel. I ended up behind a train station. I must have run a mile, maybe a mile and a half? I have no idea. I didn't wear the GPS because I thought it would be fun and I didn't charge it.

I shoveled some more when I got home to widen the driveway since it was a bear to get out that morning. I took 3 Alleve when it was all done. I did nothing at all yesterday.

It is Week 4 and Day 1 of my Uplift training plan. I did something that would not have happened at Week 1. I ran a slow three and a half miles on the road AND my UpLift training. Today's workout was an Abs/Hiit combination. Google tells me that hiit training is high intensity intermittent (interval) training. I worked on my abs for three rounds and a plank circuit. If each plank based move were any longer than a minute it could probably be used to gain intelligence from me. I hope to continue both running and weight training towards peak-ish form so can eventually play a game of exploding heart with friends, aka winter trail running.
at January 28, 2016