We flew up to Minneapolis Minnesota for Grandma’s Marathon. From Minneapolis we drove 3 hours north to Duluth. My friend Marian recommended a bakery called Tobies for their caramel pecan rolls, something she had frequently as a child when driving from Minneapolis to Duluth. We arrived in MN around 3pm. By the time we got to Tobies, it was around dinner so we had dinner there. I had a Cajun seasoned chicken breast and a baked potato. JP had a flat meatball and spaghetti. AP had walleye and a baked potato. Afterwards AP and I had Caribou coffee and JP had a chocolate glazed donut. At this point I had abstained from alcohol and desserts, so even though it was my birthday I was still on my pre-race diet. JP saved me a bite of his donut, which was just the right amount.

We stayed at the Best Western on the Wisconsin side of the bay. Rooms for this race were impossible to find in February and March of this year. I was happy to find a room on the Wisconsin side. The hotel wanted me to book it for Friday and Saturday night. I used Expedia to book the room on Thursday and Friday night. We planned to stay in Minneapolis on Saturday night since our flight was leaving early on Sunday. It was cold and rainy when we arrived. We checked into our room and stayed there, tired from our day of traveling.

The next day we dressed in long sleeves and rain coats. We had breakfast at the hotel and headed out for our first adventure in the new state. We went across the bridge to the Duluth Coffee Company. I had my usual soy latte and AP had a pour over coffee in a giant espresso cup. Then we headed up the street to the Duluth Trading Company. We spent a while in that store. I looked at shoes, AP tried on pants and JP colored. We left with a tub of lavender scented cream. Then we drove over to the Convention Center  for the Race Expo so I could pick up my packet and also Kaitlyn’s.  As with big race expos there's always a ton of swag. We walked away with a free cowbell, several bags of potato chips, I bought a long sleeved shirt, sticker and an Arbonne sample of massage gel.


Then we set out on the scenic drive along Lake Superior. The drive along Scenic Highway 61 was pretty. It was the first time I had seen Lake Superior. Seeing it was beholding an ocean where there wasn’t one. I was awed, humbled and overjoyed to be in that little rental with my boys. We were headed to Split Rock Lighthouse and Gooseberry Falls. 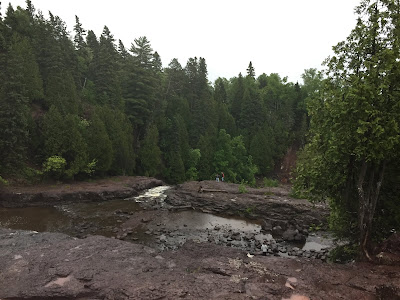 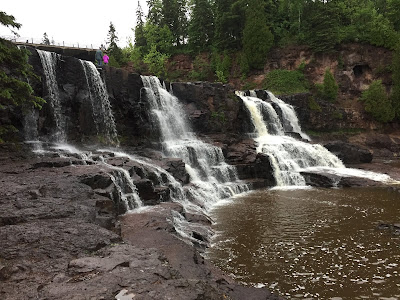