This evening, I attended a call hosted by United We Dream (UWD). Here are my notes from the meeting.

Today the United States Supreme court made the decision hear the case that has been stalled in Texas. This means that "we are getting our day in court". DAPA would grant deportation relief to 5 million people. Greisa noted that she is a DACA recipient. Her mother would qualify for DAPA should it come to pass.

What this means is that the State of Texas and the US Department of Justice argue in front of the Supreme Court on why DAPA should and should not happen. Each side gets about 30 minutes to present their case. We will know later this week when the two sides come before the US Supreme Court.  The main question to be addressed is if President Obama had the power to grant work permits to potential DAPA recipients. UWD notes that DACA 2012 was within the President's powers.

UWD expects oral arguments from both sides to happen in April.  If so, a decision from the hearing might happen in June. Timeline will be confirmed by the end of the week.
Currently we need 5 out of 9 Supreme Court judges to be on our side in order for DACA/DAPA to "become a reality".

UWD's goal is to defend the DACA 2012 victory.  UWD aims to ensure the American people know who we are defending. Their job is to "lift up stories" of people we love so they can be heard. We need to put a face on our community members.

Currently, Justice Kennedy might be the deciding vote towards this victory and hat Chief Justice made "the right choice". In defending DACA/DAPA we are defending DACA 2012.

This dialogue was followed by a Q&A session:

Q: how can we get more support for this in Texas? Not a lot of people know about UWD. How do we start a chapter in Brownsville, TX?
A: Our guideline is the case against marriage equality. People NEED to come out and share their stories.

Greisa is from Dallas TX so she understands environment.

We need to bring people together to share stories online/offline. Call participants are urged to email david@unitedwedream.org. with questions after the call.

Q: How is everything happening going to affect DACA renewals
A; As far as we know, current the lawsuit has no impact on current DACA 2012. Come to Own The Dream Network to get updates on DACA 2012 renewals.

The executive powers that allowed President Obama to grant DACA 2012 are the same powers he is using to enact DACA/DAPA. If you qualify for DACA 2012, continue to apply for it.

Q: What is the difference between DACA 2012 and DACA/DAPA?
A: You are eligible for DACA 2012 if you came before the age of 15, DACA/DAPA expands to older folks, eliminating the age cap. You do not need to have been here by June 15, 2007. DACA/DAPA increases the amount of people that would qualify for deportation relief. DACA/DAPA benefits are the same as DACA 2012. However instead of 2 years with DACA relief, you get 3 years..

At http://www.weownthedream.org/ sign up for the DACA renewal network. The website will advise you on how much to start saving and how to go through the renewal process

Q: When the hearing goes through, who is representing UWD?
A: The US Department of Justice will be defending DACA/DAPA. The Attorney General of Texas is on the other side.

Q: How do you go about applying for DACA plus if you came into country legally?
A: DAPA requirements:
UWD emphasized that they are NOT lawyers so they cannot provide legal support. Refer to USCIS.gov.
.
Q: There are often complaints that the State pays more money if DACA/DAPA were to be implemented. That is not true. What do we say when this argument is put forth that recipients of DAPA plus would get Social Security and welfare benefits?
A: This is a political fight.  Republicans will use these talking points to alienate us. The reality is DACA/DAPA will function like DACA 2012 . People have to pay a lot to go through USCIS and obtain deportation relief and people would pay for driver licenses, DAPA recipients would remain ineligible for government  subsidies like health care or for food stamps, The benefit would be living without fear and living with dignity.  DACA 2012 generated millions of dollars for the US government. DACA/DAPA has the same potential.

Q: How long would it take to get a reply when filing for DACA as it stands now?
A: Again, call moderators are not lawyers but  DACA wait time varies. If it takes more than 3 months, you should reach out to UWD, since it is longer than normal processing times.

Q: Is it too late to file for DACA 2012?
A: The current lawsuit does not affect DACA 2012. If you have been screened and eligible under 2012 guidelines, you can still apply. You should get fingerprint notice of appointment within a few weeks, within 6 or 7 months, you should get a reply or a request for more evidence.

Do not listen to "notarios"/scammers. The timelines cannot be changed. Do apply for your renewal on time.

Q: If we lose the DAPA fight, can Republicans challenge DACA 2012?
A: Yes, this is a concern. Republicans have said repeatedly that this case in Texas is only about DACA/DAPA. That being said, the possibility exists to attack DACA 2012 legally since DACA 2012 has legal vulnerabilities. We need to protect ourselves and our parents! Do spend extra money and get an attorney!!

There are free legal clinics happening all over country supported by attorneys. There are also attorneys at a low cost. Review your options at the weownthedream.org page.

Q: The caller from Arizona is a beneficiary of DACA, She is married to US citizen and now eligible for an adjustment of immigration status. Siblings have now immigrated to the US. Are they eligible for DACA?
A:  As soon as you turn 15, you can apply for DACA 2012. If you turn 15 and meet other requirements, you can apply for DACA 2012. DACA benefits last for 3 years but because of current the ongoing lawsuit, the benefit expires after 2 year.

Q: Is there something that one person an do harm DACA? There's a lot of people working against us. We have become scapegoats for crimes happening in this country.
A: At its core, this is a political fight.  There isn't a thing that one person can mess it up  but we need to find other people, like us.  Young people need to come together and say "this is not the world" in which we want to live.

Q: What does it mean if a Republican wins the Presidential race?
A: UWD shares this concern. UWD and its affiliates are committed to the well being of all 11 million undocumented immigrants. The core of our goals is to stop deportations and keep families together.

DACA and DAPA do not define our victories. UWD also maintains a network of defense against inhumane deportations.  We support local campaigns, for driver's licenses, Republicans have made it clear that if they win the Presidential election, they would roll back DACA benefits, We have lived without these benefits before. DACA/DAPA is only a part of UWD's work.

Q: If the Supreme Court rules in our favor , how soon can we start applying?
A: This is getting a little ahead of ourselves. If we get a decision in June, implementation of the decision might be made by Nov 2016.  This is best case scenario.

There are raids across the country. It is important to see that all this is connected. When the announcement was made this past November, President Obama told ICE who was a priority for scrutiny and deportation, which is anyone that arrived after 2014.  The people getting raided are still part of our community. UWD urges call participants to know your rights. Check out the United We Dream page.

Here is the graphic mentioned in the call. 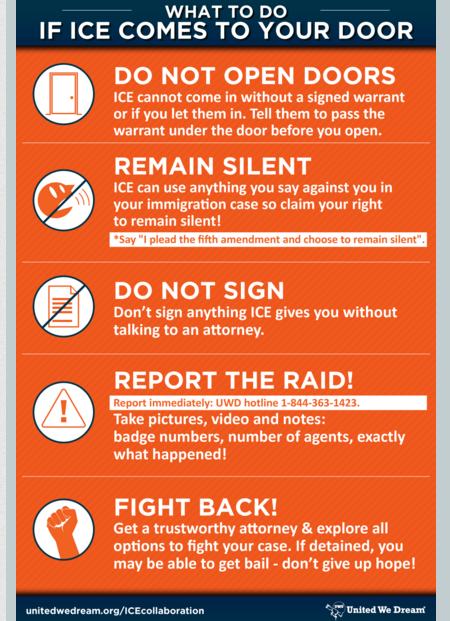 If you are DACA eligible, share your story on the UWD webpage. Show them our community is strong and we will stand together.