I completed the Derby City Trifecta Olympic Distance triathlon. I prepared for this race with a plan developed by my friend and coach Jeanette.

In my adult life as an athlete, I have never had a coach. I enlisted her help to prepare for the 50k in December. In addition to following a plan, I wanted to be able to check in with someone with how closely I was following the plan. I wanted help in the areas that needed to be modified. For instance, I did not do well during a three week taper given my disposition. I felt sluggish. I also felt like my middle of winter self despite the marathon being in May. I was sleeping during the day and sometimes in front of my happy light. I might have done better with 2 weeks. I also liked the tempo runs during triathlon training, which I would like to incorporate into my 50k training.  Lastly, given Jeanette’s disposition and experience as in Ironman finisher, ultra-finisher and cancer survivor, I wanted to be able to check in with someone like her. She is on a journey of her own as a personal trainer. I asked for J’s help as a coach a couple of months ago. She was kind enough to prepare a triathlon training plan that incorporated my husband’s work schedule and a few “for fun” races I had on my calendar.

A lot of the plans I had found online were too detailed with bike drills, swim drills and running drills. I have experience in a previous life doing triathlons so I just needed a plan with the distances. I could dial the intensity up or down as my schedule allowed. I was approaching this race with an older body but more knowledge accumulated through running marathons and the collective experience of MRTT. Unlike that previous life, I wasn't working through any emotional crisis. This race was for fun and a break from running. I started cycling and swimming again. It was partly to acclimate to the onset of a hot and humid Kentucky summer. My asthma bothered me and swimming and cycling were more forgiving.

J uploaded an Excel document doc on Google docs. The document had my workout and also a log so I could write out my actual activities. I also wrote notes on my mood, how I felt during the workout if it was a good training session or not. I wrote about adding or decreasing intensity, duration or distance. I viewed the document as the least I had to accomplish every workout. J checked in with me once a week through Facebook Messenger. It was an ideal arrangement.


Right before race day, J said to have a picture of myself “gliding through the water, cycling with strong legs and running with my head up, strong arms and legs pushing through the course”. I think I might have had some pre-race anxiety 2 weeks before the race followed by the eerie calm race week. I thought about J talking about her Ironman during a bike ride .She said it was one of the most fun races she had done. A part of me couldn’t comprehend how such a long race could be fun. Another part of me understood that anything could be re-framed from a source of anxiety to an adventure. I was ready to pivot some angst into something else.

Packet pickup for the race was at the University of Louisville boathouse. The race was small and well organized. On race day, I parked near the transition area. I had a 5 gallon bucket given to me by Kaitlyn, my marathon partner. I got the idea also from J through earlier posts in our MRTT Facebook page, as a gift for a dad getting into triathlons. This relatively cheap piece of equipment could house shoes, gear and helmet and also act as a stool during the footwear change.  K turned it into a way to cheer me on even when she wasn’t with me. 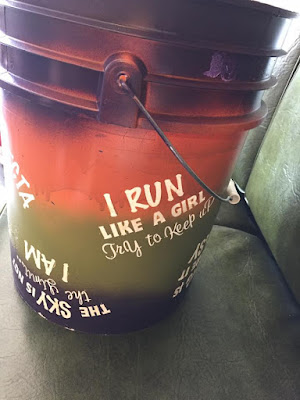 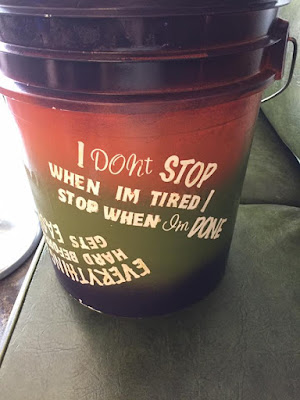 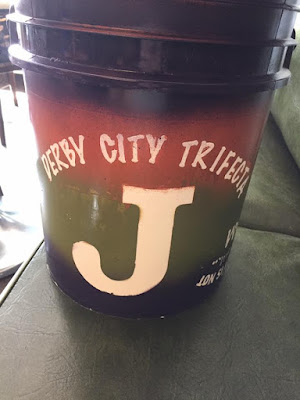 On race day, I used a similar mental strategy as the marathon, listening to a song until it was in my head. When I felt pain mid race, my mind would default to the tempo and lyrics of the song, rather than the usual screaming in silence.  My song for this race was Yellow Flicker Beat by Lorde from the Hunger Games Soundtrack.  It seemed appropriate since Derby City is the Katniss Everdeen’s hometown.

As Coach J has also told me for previous races before she was “coach” was “give yourself permission to start slow”. (You are starting to see why I asked J to be my coach when the opportunity presented itself right?). The song started slow. Every part of the song allowed me to visualize every part of the race. The pace of the song allowed me to focus on the sunrise on the Ohio, catching my breath and finding a rhythm in the river. There were a lot of people in the river as we started off in heats. I was in the last heat with the rest of the women. They had us jump in from a small dock before the official “go”.

There was zero visibility in the river. Athletes had to rely on their senses of touch and lifting the head above water. I felt myself panicking at the start because I had no perception of moving forward. I felt like I had no chance of swimming away from the mass of humanity. I could not see my hands. We all seemed to be flailing in place. Despite that,  there was the distinctive burn in my shoulders from free style forward. A couple of times I found myself bumping heads with swimmers that had found the first turn around point and were headed the other way.

There were times I switched to breast stroke until I saw the bright yellow buoy. When there was nobody around, I broke out into full freestyle stride. I tried not to think of what was in the water thanks to having read Pandemic by Sonia Shah (thanks a lot NPR). It was Lorde at every stroke, the spectators at the riverbank and the boats that would denote the passing of 1500 meters.

The end of the 1st leg was back at the dock. The race organizers had a ramp where two volunteers were assisting swimmers out of the water onto the dock. I thanked the volunteer who grasped my hand and arm while I scampered up the astro turf. I took off my caps (I wore the race issued cap over my silicone cap that covered my ears) and goggles and jogged up the floating dock to the first transition.

It was good so sit momentarily while I put on my bike shoes, which had my blueberry RX bar. I put on my helmet, sunglasses, bike gloves and watch afterwards. I jogged my bike outside of the transition to the bike mount area. Then I was off. The 40K was 2 loops on River road. I found myself commentating on the race like it was a harlequin romance. I was cracking myself up. I couldn’t recall the monologue now if I tried. I just remember thinking of men in halter tops and the names of bicycles taken from the periodic table or locations in Mexico. Then just like a switch flipped. My internal monologue went from jovial to cranky. I dug out the bar from my back pocket and ate it towards the end of the first loop. My right hand was on the handle bars and the left alternated between eating and steering. There were a ton of people that passed me on the bike that I probably passed them on the swim. 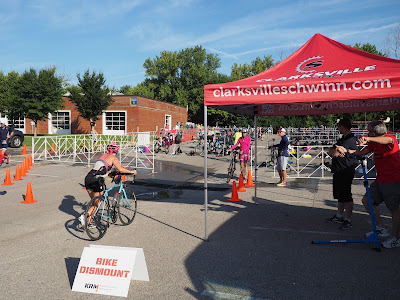 Parts of River Road were cracked. I rode as hard as I could. At times I held on to the bottom curve of the handle bars to keep some sort of aerodynamic pose like the other athletes. I gave up doing that since it’s not normally how I ride. Since the course was flat, I did not get up from the saddle at all, which makes for a sore bottom. I was ready for my third leg.

I got off at the dismount area and jogged to my transition. I sat on my bucket to get my bearings, get my bike shoes off and my running shoes on. I had my visor and a Honey Stinger Waffle on my running shoes. The RX bar was so filling, I didn’t need the waffle. I just held on to it and began my run.

Unlike my previous brick workouts, my legs felt stable. The 10k course was 2 loops into downtown Louisville.  It was a flat course and easy to run. I averaged about 9:30-ish pace. The course was an out and back with a loop at the top, like a lollipop. It was shady in some spots and forgiving. It was where I saw my boys. My son started to run with me at the start, maybe 75 meters. I had to send him back to his dad.

There was water and an electrolyte drink on the course. I had water once. It was cool in the shade. I found myself thinking about men and women in super tight tri clothes. I referred to my own getup as sausage casing and I was oozing out of it. Then I started to think that an event like this was a celebration of those oozing imperfections. No matter what time did to these bodies, they persisted indomitably forward.

Towards the end of my 10k, my son found me. I held his hand as we headed towards the finish. I instructed him to lift his hands high as we crossed. It was a glorious finish. It would be the second time my son escorted me into a finish line for a big race. The first was the Horse Capital Marathon.  Afterwards, we both had water, mini donuts and chocolate milk. 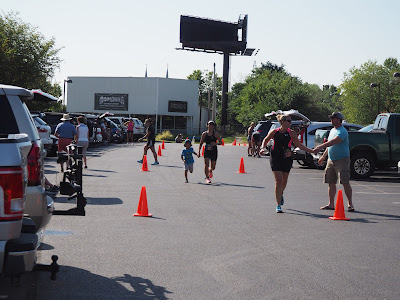 As I write this out, I realize how much having a coach in my corner has impacted my journey as an endurance athlete. I remember one of my English teachers saying that someone to care about your work can have a huge impact on your writing. I remember blogging for the first time and having my reader react. My efforts towards writing wasn’t in a vacuum anymore. The reader completed the process. In training, having a coach tuned into the technical aspects of my endurance journey is a layer beyond the camaraderie of MRTT. I know the things I have done right and the things that could be improved upon, like when to fuel for an Olympic distance triathlon. At age 39, I dislike admitting my vulnerabilities but opening up to Jeannette as a coach, beyond being friends has been worth it.


Photos courtesty of the race director: 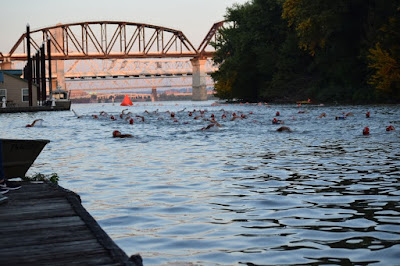 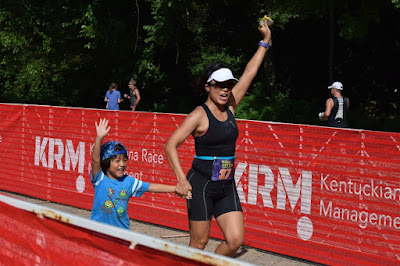