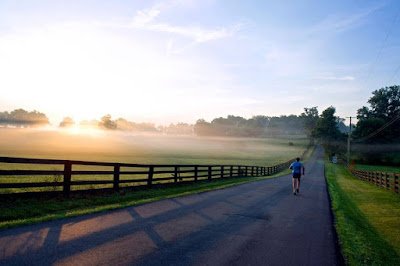 I completed the Horse Capital marathon in Lexington this past weekend. My family and I went to Lexington on Friday afternoon. I was already in the zone. I ate mounds of pasta Thursday night so my insides could have a day to settle. Friday night dinner was grilled chicken, baked potatoes and broccoli.

I got up at 4:30am on Saturday to eat and have coffee. I had a chance to listen to music, stare at the wall and wake up. I picked up Kaitlyn at her hotel at 6:15. We got to Fasig Tipton around 6:30. We picked up our bibs and shirts, went to the bathroom and we were off at 7am.

I was obsessive about starting at the 11 min mile pace. My 1st marathon was a learning experience in strategy so I wanted start off slow and make sure I still had something left in the end.

It was a beautiful morning. It was a picture of rolling fields, textured clouds, manicured grass and hedges and well-kept fences. There were barns, homes and sinewy horses surrounding us. We even saw a group of cows.

We met a runner named Bob (which was a good sign) running the half marathon. He was a good story teller. I was too far inside my head so I was happy to listen. He told us he was a diabetic. Running kept his numbers in check. He also said his mother was worried about him running. He said before she passed, he was able to run a marathon and have her see him finish. He also told us that Dale, our 4:55 pacer and his co-worker, was formerly 600 pounds. Dale lost the weight through diet and exercise. He was on the Today show and the Biggest Loser. Kaitlyn and I were sad when we separated from him at the 10 mile mark.

At 15 miles, I was queasy. I stopped running and took one of my salt tablets. I felt better. I always suffer at this point, even in training. Kaitlyn talked me through it. I thought of my friend Amy who said she felt powerful at mile 18 during her first trail marathon. That’s where I wanted to be, even though the heat turned my insides. I asked Kaitlyn to tell me about the winters in Minnesota, where she was from. She told me they plugged their batteries during the night to make sure their cars started in the morning. We talked about the grey skies during the winters in MN and upstate NY, unlike the bright blue sky upon us.

I marked the moment at mile 19 because I was happy to be there. During my first marathon, I was demoralized seeing how far around the lake I had to go. This time I felt no knee pain, no gut pain and no wanting to be elsewhere.

I saw Kaitlyn starting to suffer. I told her she was amazing. What else do you call someone who doesn’t have a history of running that has a bad first marathon and does another one a month later? She wanted me to leave her. I didn’t. I told her stories about my son telling some other boy at school in a haughty manner that what he colored was a leopard and not a cheetah. The boy told my son he could do whatever he wanted in the manner 5 year olds do.

Those last miles were a combination of walking and jogging. The Lexington farms were bathed in sunlight but the road was like the dessert. The temperature was in the high 80s and there was no shade. We took turns holding my water bottle, drinking from it, spraying each other and ourselves.

Towards the end, Kaitlyn said we had been running for 25 miles. It didn’t matter how we were doing it as long as we moved forward. I always thought of running as a solitary sport but in those moments, our pain and elation was shared.  At the finish, the boys and my sisters in law and Bob were waiting for us. Everyone was so proud of us. 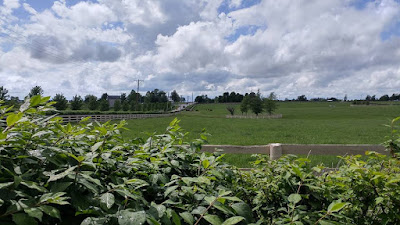 It wasn’t the time I had hoped but my goal had been to finish mentally intact.  As a person with so many hang ups, I didn’t want one more. I didn’t want to cry. It was a long run and not something that defined me. There was no larger meaning in the numbers (you can see the things I had cried about during the first race) other than it being the result of the time I poured into it. My MRTT friends, who were texting me before and after, all knew this but it was something I would have to come to on my own.

I am a runner with depressive tendencies. The most important thing I came away with from this run was that I could be in pain and not let my mind go into dark places. I could decide that negative self-talk did not have their voice even when my mind was fatigued. I prepared for mental fatigue by overplaying a song by Rihanna.  When I was not able to talk to myself through running, the song would remind me that we were chasing the light and also making a choice to be happy.

I chose the Hal Higdon Novice 2 training plan. I had 17, 18 and 20 mile runs before this race. I was supposed to have a 19 mile run, which ended up being 11 miles because I injured my back that morning. I took it easy for about two weeks and saw a chiropractor . I was on a regimen of ice and frequent walking during the day to keep the blood flowing around the injured area.

There was no speed work in the plan but I incorporated my own speed work in the end. I have been training with Kaitlyn, Ulises and the women of MRTT on road and trail since the winter. Running in the heat had its repercussions post-race. I needed a lot off food and fluid to recover. On the trails, I usually run with a hydration pack but I chose not to for this race thinking my torso would get hot.

The day before the race I used a foam roller and yoga to loosen my shoulders and my glutes. Those areas suffer from me sitting at a desk from my job.

My nutrition during training was Tailwind and Honey Stinger waffles and chews. The waffles made me feel sick during the race. I was better off drinking Sword and eating pretzel bites and salt tablets at the aid stations. 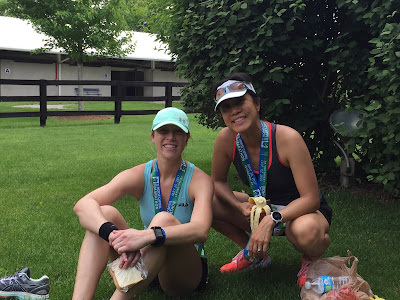 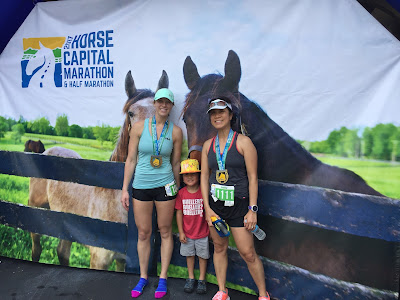