As I write this post I am hobbling up and down stairs, aged about 20 years. I completed my first 25K “race” this past Saturday. I say “race” because there were many times there was nobody in front or behind me, which is the nature of trail racing. The longest “race” I had ever done before yesterday was 10 miles at Evansburg State Park in Pennsylvania about 10 years ago. I got back into trail running to heal the pain in my right arch. I also found a great group of women with whom to run. Lastly, I also learned trail running didn’t have to be so messy (I often fell).

I signed up for the Rough Trail in hopes I would find a similar group as we moved ourselves from the Northeast to the Bluegrass (and I did).

My partner Nancy was down with a migraine and stomach flu. I drove to Red River Gorge with another woman from the group. I met her at her hotel in Lexington and we were on the road at 6:30 am.

I learned Kelsey was recruited to do crew for the University of Louisville. She signed up for the race last minute never having run trails before. She signed up for a marathon in the spring and aspires to do cyclocross competitively. K stands a head taller than me. I think she could have been dropped in a military hot zone and would have been fine.

On the way we saw a wildfire smoldering. It looked like a barbecue grill right before you throw the meat on. It was the forest mid colon cleanse. It was both eerie and spectacular.

This year was the second time the RT was held. The event was small. Parking was a premium since it was a campground. We were encouraged to carpool. We warmed ourselves over a campfire next to a tent where they handed out the race packets.

K’s hydration pack was missing a buckle for the chest strap. She did a lap to see what it felt like, while I shed layers begrudgingly. I ran back to my car a couple of times while we were waiting for the morning meeting to start. First to get my trail map and the second time to make sure the car was locked (neurosis).

The morning meeting was the race director telling us the first stretch of the course was marked with caution tape and the rest was with pink and black checkered ribbons.  Then we found ourselves at the start and counting down our own start. My Garmin never found a satellite signal. We did a lap around the camp ground and we were off into the trails. I lost K early on since my feet were cold. I took it easy until I warmed up. I am glad I went back for my map. I focused on getting to the first aid station. It looked like 5 miles away. It seemed like a really long 5 miles. I stopped an hour and a half into the race to take my cold pill. At some point I asked what mile we were on and someone told me around 6. 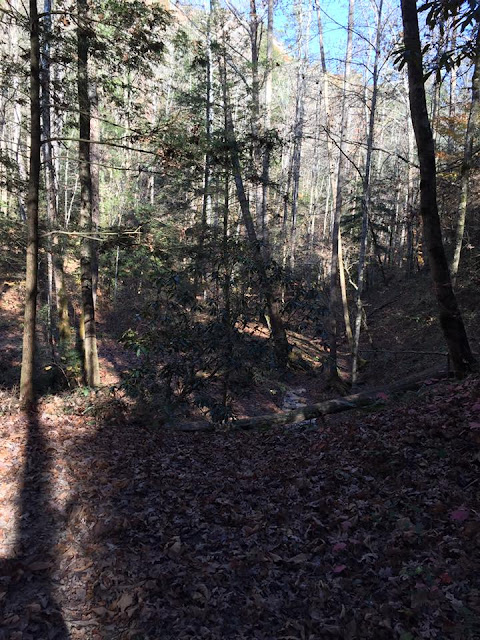 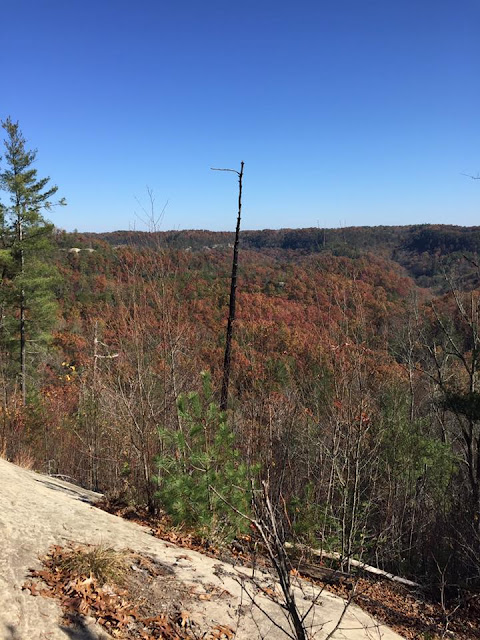 I ate Kirkland kettle cooked potato chips and shot blocks at the first aid station. I was checked in by someone from the race. I also refilled one of my water bottles before going on.

I stubbed my toe on a root shortly after. One of three ladies in pink behind fell hard over the same root. The trail was covered in leaves.

The course itself was beautiful. We were running over plateaus, up steep inclines, beside rock walls, up and down stairs, skipping over streams and inside ravines. The paths were 2.5 feet wide (just like JMF). Other times I walked up and down that was not runnable. I did not laugh out loud at the lack of runnability of the terrain (I have done that before).  My only incident was sliding down a rock face at hip height while trying to get down. I might have been on my bottom briefly.

All this being said, I felt shitty going into this race. I OD-ed on water, sleep, Benadryl and Alka Seltzer. The only reason why I bought Tylenol cold pills was to be able to take it during the run. I also pulled over a few times to blow my nose. One woman commented she was in the midst of drowning in her own snot. Gross but true for me as well.

The miles to the second aid station were long. I walked up a lot of hills and even on flats at the top because my thighs hurt so much. I craved those potato chips. I think I ate a Lara Bar at some point.


I definitely wondered what I had done signing up for this thing. My right knee and ankle hurt. K said she probably favored that leg since the same things hurt for her afterwards. I didn’t see her until the end. I was alone for most of it. I had hoped to run into Dannielle doing the 50K. The backwards part is that I got annoyed when people came up behind me or I saw someone up ahead. Must be the kind of things cats go through.

The most interesting part was the creek crossing to the second aid station. People skipped rocks but I choose to walk over a log. I didn't want to get wet. The upwards climb afterwards was slow. I walked most of it. I wondered how and why the organizers made a race course out of such terrain. It was probably the miles talking.

When I arrived at the aid station, I ate ½ a peanut butter and jelly on white, which would normally not choose, and those glorious kettle cooked potato chips.  I hung out for a while. The race directors required us to check in at each aid station.

The downhill back to the creek crossing was much better. The path after the crossing toward the finish was also much more runnable. I had my map handy and would match up the trail signs with my location on the course.

I was heartened when I started to recognize the way we entered. I had no idea how many miles I had left, which was a total mind fuck.

I was talking to my legs to pick up the feet and keep moving. I told myself even if my run was at a walking pace, the race would end sooner.

I passed a few people that told me I was almost done. I passed some guys that were fighting cramps in their calves. I passed another guy that was upright and advancing but seemed to be in some kind of all systems failing mode.

I was aware I was no longer making eye contact with hikers passing by. I did not wear a smile for being on such beautiful terrain. I was sort of aware that the continued slow churn of my legs decreased the overall pain. I was happy (in a grumpy sort of way) to make the last right and see the finish.

I guess it was a good thing I wanted to eat rather than not. I found K and we commiserated over the pain. Her prize growler confirmed for me this woman was a badass. We hugged each other and agreed it was hell. We didn’t see any other MRTT members. I did see some guy cross the finish with his arm in a sling.

After I ate my bean soup, cookie, brownie and drank my Sword, we left. We were eager to change into dry clothes, get warm and sit. This was when we talked and got to know each other a bit. We talked about the limitations of the older Garmin watches, cycling, and the election. It was a blessed four hours that did not think about this past week while in my pain quagmire. K and I laughed that she was in a mom’s running group. I came away thinking she a powerful athlete and that she really had her shit together.

I never thought these hard races were about pushing your limits, although it was that. It was about seeing terrain I might not see otherwise, making new friends and throwing myself into something so fully that I forgot the rug had been pulled from under me.  Despite my pain, my feet were still on the ground and would always carry me forward.

Note: Later on that night when I was back in Louisville, I woke up from fetal position feeling my legs moving back and forth like I was still running.

I had this in my head most of the time, which seemed appropriate.

In terms of running while sick, I did everything right. I hydrated, slept, took my decongestant and cough medicine every 4 hours in the days leading up to the race, during the race and afterwards. I also ensured proper hydration during the race. That being said, I am still feeling rundown a week later. Running for 4 hours doesn't help being sick. The best way to avoid sickness was not to have run. I chose my poison.

I learned never to write a race report post a heartbreak of a Presidential election. I should be good for another 4 years.

I learned I need to get strong. I need to focus on strength in my quads, glutes, ankles and calves to be able to withstand the rigorous climbs.

Also, I would do this race again. I told my MRTT crew that I would probably call it "fun" after a week or so. It was fun and I did recover.
at November 14, 2016