Every time I get to talking with the MRTT ladies about marathon war stories, at some point I always say something like, “I wish I had had a voice during the hardest part of the run, telling me, ‘you got this’”, so I don’t break down and start weeping like a child (which has happened). Last Saturday morning, I had that voice, albeit in my head, her name is Marian.

It was two weeks away from my Rough Trail 25K . I had planned on the longest run 2 weeks before my race, so I could spend the weekend before on a less long run and have a chance to recover. My training plan has become a hybrid of marathon, a 25k trail, UpLift, triathlon and cycling.  (Note to self: Read a book on endurance trail running because this reads like I can’t decide).  Fellow MRTT-er Marian, the one outside my head,  would have led us but has been down with pneumonia for a few weeks.  I became the default front woman having run it before.


Nancy and I met at the donut shop so we could drive down to Jefferson Memorial Forest together. We were thrilled that the restroom at the welcome center was open before 6:30 am. Once we strapped on our headlamps and hydration packs, we were off.  Marian, in my head, reminded me to take it slow, which we did. We averaged about 20 mm for the first 3 miles. Much of the trail in the beginning were switch backs and up hills. In the times I had run before with my partner, who is much faster than me on the road, we hadn’t spoken much. On the trail, she was at my heels as we made our ascent together. I watched for the white markers on trees since the path was covered in leaves. 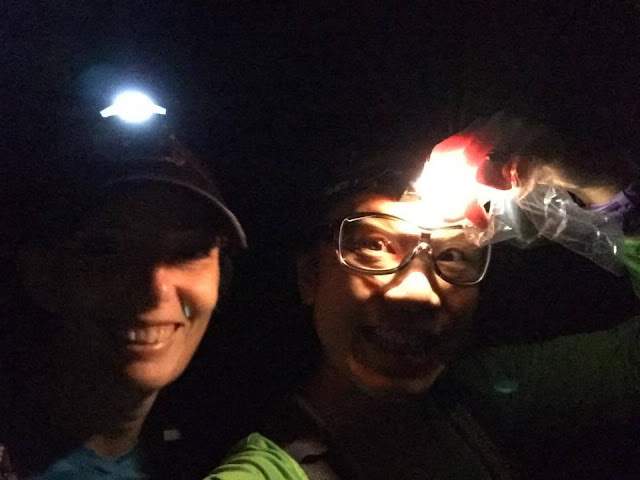 At one point on the way up we heard what could have been a small cow, small bear, large dog or zombie (as my 4 year old offered up). We opted not to talk about what it might have been or look in that direction. I remembered Marian reminding me not to think of scary things. Instead she said we were a couple of badasses for being out there in the pitch black. So my partner became an extension of my senses as we made it through the dark into a spectacular sunrise. 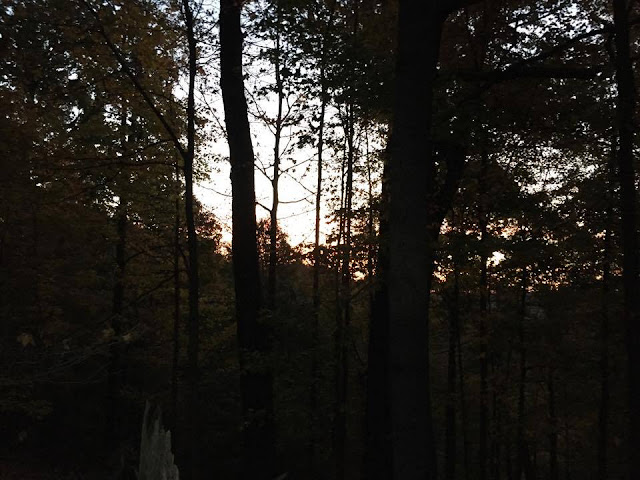 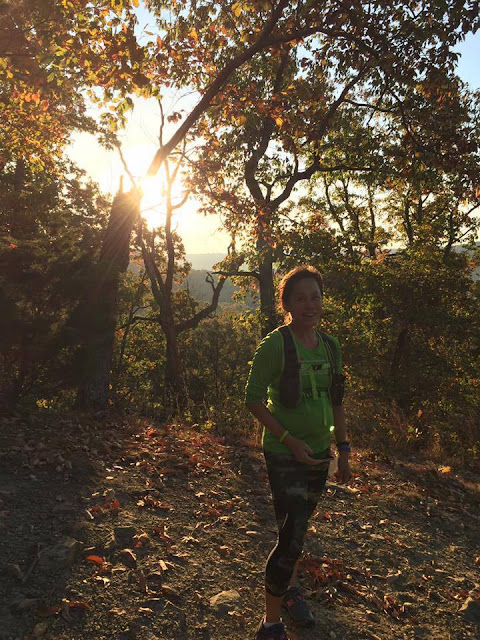 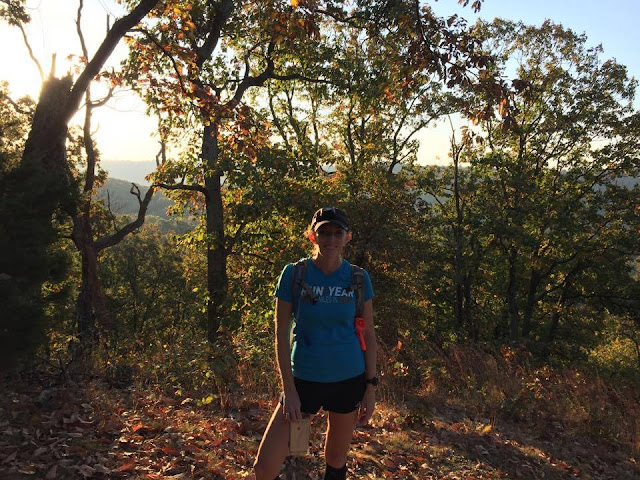 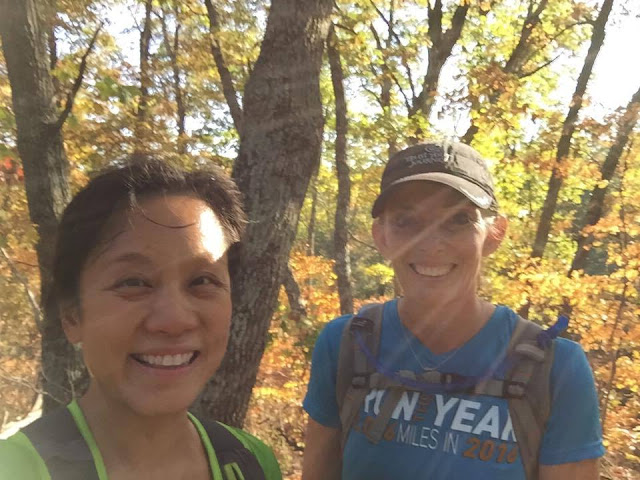 Maybe it was around mile 4 that my partner and I started talking about what happens to runners during long runs, the crying at marathons, breakfast, the GI tract situation, our hardships, did I overdress for this run and why compression socks were wonderful.

At mile 5 we met up with a beagle who ran with us for a few miles. We gave him our boiled salted potatoes. Nancy tried calling the number on his collar but we had was no cell service. The pup followed us out of Siltstone and into Scott’s Gap, where we did get a signal.

We waited for a few minutes until a red truck came by to pick up the pup. We ate our protein bars. The beagle’s owner explained that the dog had gotten out in the middle of the night since they had altered the wood surrounding his pen. It was great to rescue a dog from his home. We saw them pull into their driveway about 100 feet away. 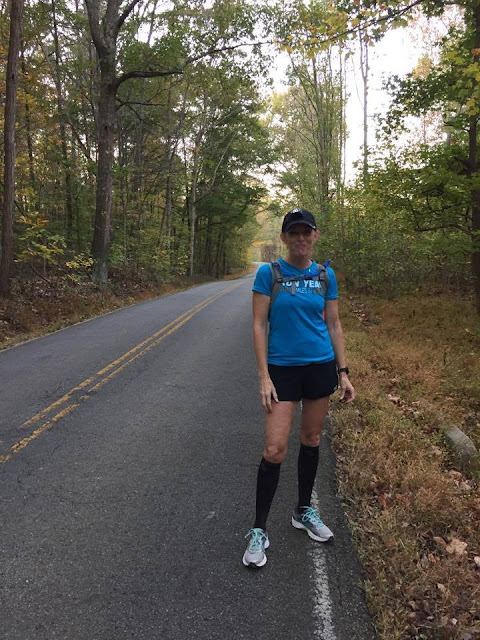 We ran about another ¾ miles through Scott’s gap before we headed back at the 7.5 mile mark. This path was marked in red. It was even more littered in leaves.  This trail was marked by red spots.

The first uphill back on Siltstone were the hardest for me. My partner said maybe we had lost our groove having stopped for the dog. I even knew there was a plateau at the top of the hill. They still felt like lonely miles. Maybe it was knowing my boys had gone to Glasgow for the night. It made me think 25k was my limit and what the heck had I gotten myself into? Runner’s bipolar at its best.

I didn’t feel better until the uphill was over and I recognized the trail again. One of the trees dropped a nut on my head. It was probably the size of a golf ball but felt like an apple. My GPS died at this point, which I found hard not knowing how far we had gone and how much we had left. Nancy said it may have been working hard to find a signal, which was scarce in those woods.

Those last few miles were the longest. I definitely overdressed wanting a thin layer on my skin in case I fell. It unseasonably hot so I drank my water sooner than planned.

We were amazed at the terrain we climbed in the dark, seeing it in the light on our way back. JMF is not easy due to the ruggedness and elevation. Running towards those donuts took forever. We passed a woman with a big dog. She smelled fresh and perfumed, unlike us. 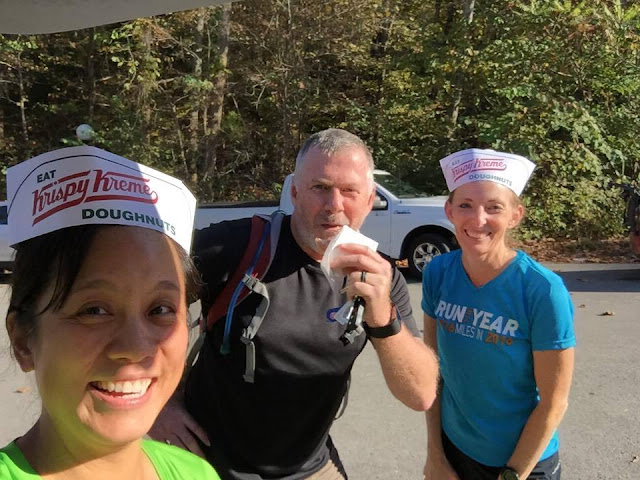 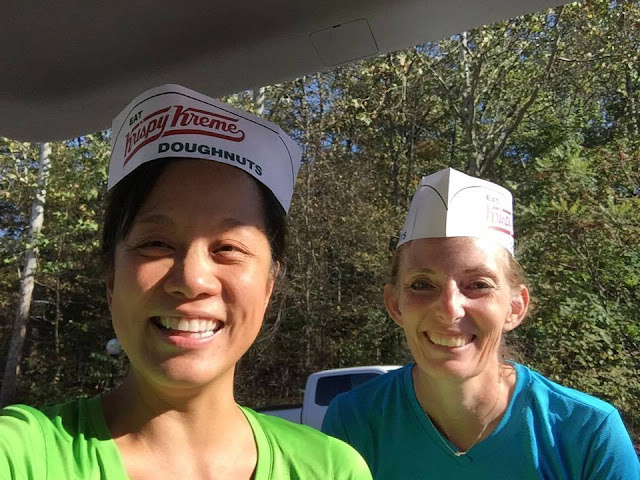 Note: All kidding aside, there was a lot of preparation that went into this run.

I went into it with a partner. My pack contained a small first aid kit, tissues, hand sanitizer, wipes, albuterol and a whistle.

We had ample water and nutrition (Cliff Shot blocks, Rx Bar, Mocha Cliff shot, boiled salted potatoes) since we were out there for about 4 hours.

Lastly, as runners in 2016, our new fangled tech was charged: headlamps, phones and GPS watches (which I have found fully charged doesn't always hold up when its always searching for a signal).

All Trails rates Siltstone as hard.