Earlier in this blog, I reviewed the works of Dr. Jose Rizal.  I also wrote a piece for Ballon-Juice. So you can imagine my joy when our Corregidor tour ended early and we had some time before dinner to see Luneta. Again, mushroom clouds of joy in my little brain.

Here lies our national hero. His remains are guarded at all times. There is a huge scandal that the building in the back is being erected. It photobombs the whole scene. Construction has stopped and I am not sure where things stand at the moment.

At this point in the day my camera and phone had died. I had taken many photos of Corregidor and didn't have the foresight to bring my charge cords. I didn't think I would need them. These photos came from my cousin.

I am also seeing the limitations of Blogger since I can't put up too many photos in one post. 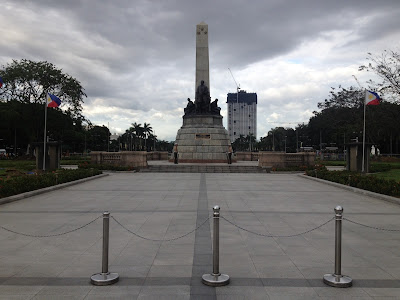 Anyway, not far from Dr. Rizal's remains is the site of his execution. I felt weird about this scene. The only time I have seen an execution depicted in statues is church. Mr. Karnow has mentioned in his works that Filipinos have martyred their national heroes. I knew this in my mind but felt different seeing it. Dr. Rizal was murdered yet there were school children taking photos next to the statues as if this weren't the case. In their defense, they probably hadn't gotten to his novels yet in their curriculum. Nor had they been digging and digging into Philippine history like yours truly. Don't believe the ominous overcast sky. It was a truly lovely day. 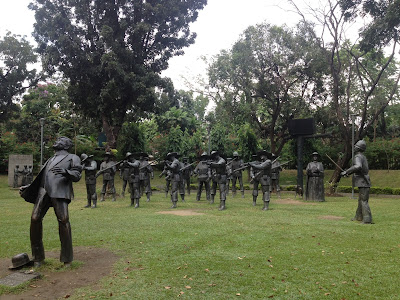 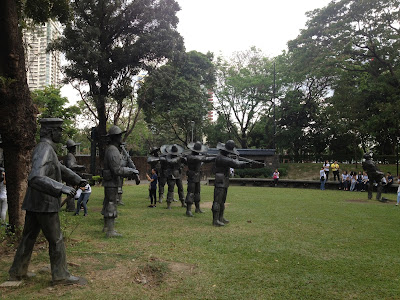