Book Review of Lives in Limbo, Undocumented and Coming of Age in America by Dr. Roberto Gonzales 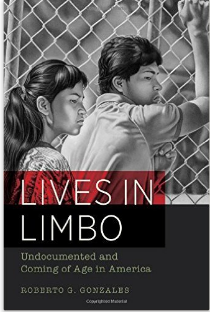 My writing pace is glacial. I told Dr. Gonzales I would review this book during Snowmageddon 2016 . Here I am mid-July with my book review.

My contact with Dr. Gonzales has been like Marius and Lestat in the previous post.  After much loss, Marius revealed their vampire origins. After much research, writing and finally getting my hands on this book, I now know why spent my 20s angry, confused and on the verge of alcoholism. I started this blog 2 years ago to explain it to myself. I am glad this book was released this past winter or I might not have started this journey.

Anecdotally, Dr. Gonzales has written having spent a lot of time among students with undocumented status. He did the work on the ground, formed relationships with these students and became a thought leader in the present day immigrant rights movement. Naturally, I stalked his work on FB, YouTube and internet. Whatever wasn’t publicly available he has given to his FB network like the article Framing Citizenship: Media Coverage of Anti-deportation Cases Led by Undocumented Immigrant Youth Organisations - Journal of Ethnic and Migration Studies. All I had to do was ask for it.

The first few chapters deal with the concept of membership, politically and culturally. Here is where I was introduced to the concept of the 1.5 generation termed by sociologist Rueben G. Rumbaut.

“[They]..were raised with the expectation that as adults they would find better opportunities than those afforded to their parents. Their schooling prepared them for better jobs. Instead, as undocumented Americans, they must reconsider their basic assumptions about the link between their efforts to acculturate and the rights they have as adults and must revise their long standing expectations about their futures while watching their documented and American friends advance, weighing options and beginning careers. They must negotiate membership in the national community as part of a group that is culturally integrated but legally excluded.”

Dr. Gonzales discusses the childhood where students have an American experience. The school system is a safe place where their focus is play and time with friends. Children grow up with the same memories and attachment to their surroundings as their peers, unaware they are on an alternate path. I learned about what sociologists call the “liminal stage”. It is the state transition from one life to another. Ambiguity is its primary characteristic before reaching the new social status.

The paths Dr. Gonzales traces two paths for undocumented youth. There are the high achieving college goers and the “early exiter”.  The college goer is supported by the academic community that recognizes the talents of the young person in their midst. Despite what the student lacks in documentation, she goes on believing that in academics, athletics and talent nurtured within the safety of academia, citizenship can one day be earned. In my case, a mother that saves all of my Honor Roll certificates and awards knowing one day they will serve as proof that we have been here.

The other path of the early exiter does not fit in the academic mold. These students depart from high school or college for reasons like lack of funding or competing responsibilities of work and academia. In some instances, they choose not to partake in the rites of passage like their documented or American peers.

In either path, both arrive at the same illegality. The early exiter gets there sooner but the loss occurs when they realize they are trapped in the same dead end jobs, often back breaking, performed by their parents in the absence of membership. Such a transition “to adulthood is akin to a waking nightmare”.

Dr. Gonzales gives a statistic of those that have been able to adjust their status through marriage, as I did, and those that don’t. If I had remained single, my fate would be uncertain, especially in the current political climate.

When I was a kid, my first boyfriend was a boy whose parents migrated from Argentina. At the time I really didn’t have my immigration status in my mind. I was trying to graduate high school and thinking about college. I couldn’t understand why a talented runner had no interest in getting into a good college. I couldn’t understand why he ceased activities, of his own volition, with his graduating class. At the time I wasn’t reading books about immigration or oogling over immigration activists like a groupie. The explanation I offer myself 20 years later is that the Argentinian boy followed the “early exiter” track while I followed the other.

I was pushed along by my smart peers and teachers. My mentors believed in what I could offer the world. I was in the top 10 of my class. I worked my ass off with the belief that I would some day earn my membership. My mother believed because not long after we arrived in the U.S., the Immigration Reform Act and Control of 1986 happened. She believed one day our time would also come.

I have to assume the Argentinian boy had a dissimilar experience. He had to have a reason for choosing the way he did before our graduating class went their separate ways. Our same status but different tracks is an explanation I over my teenage self.


Fast forward, as a writer I am mildly disappointed my story is not unique. (Thank God I haven't quit my day job) I am grateful that my story is part of a larger whole of both horror and endurance.
at July 22, 2016