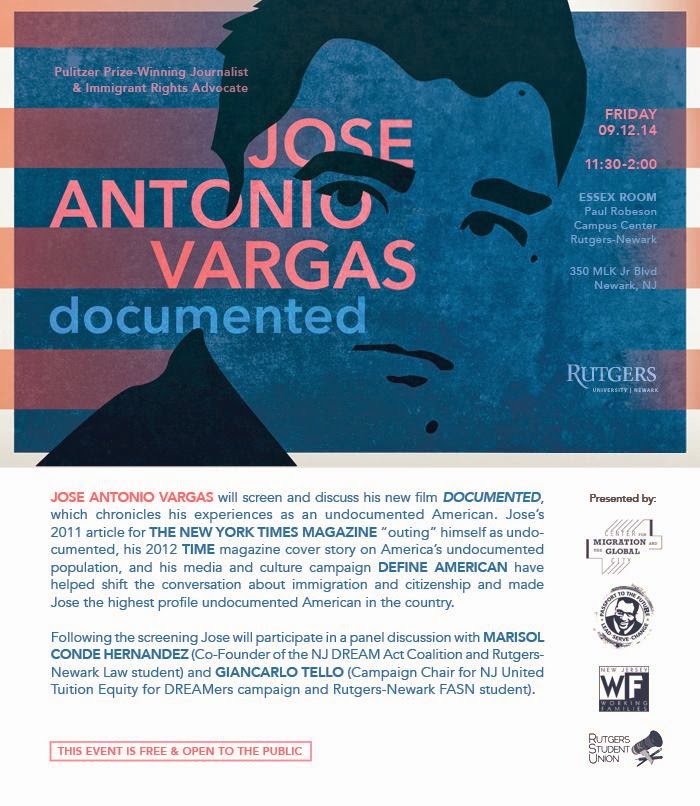 Last Friday I had the opportunity to go the Newark campus of Rutgers University to see Jose Antonio Vargas speak. Prior to showing his movie Documented, the moderator asked us to keep our cell phones on since the purpose of the movie was to encourage conversation on Twitter or Facebook. Quite honestly, I didn’t think anyone was on social media since there were so many of us brought to tears by the film. Although I have seen this film I cried at the point in the narrative when Jose realizes that he does not quality for Deferred Action for Childhood Arrivals or DACA (which allows those that were brought here as children to legally work) because of his age. I also cried seeing his mother react to him not acknowledging her as his mother on FB. He did this to ensure that nobody would ask too many questions and delve into his history. I have employed such tactics before and understand where he was coming from.  If we are not “out”, we undocumenteds (or formerly undocumenteds) don’t want to talk about the life we had prior to arriving here. Please note that Jose and his mother have not seen each other in approximately 2 decades due to wait times in getting her a visa although she is being sponsored by her mother. Also there is difficulty in obtaining a tourist visa since she is not working in the Philippines (opportunities are far and few over there). She might be viewed as a prime candidate for overstaying her visa without a job to keep her in the Philippines.


During the film Jose was not among us yet. One of his staff was charged with picking him up. Rutgers served some finger foods prior to starting. I had the pleasure of meeting Rev. Ryan M. Eller, Define American’s campaign director over tortilla chips as the room darkened. I told him I was a blogger. Rev. Eller said he would ensure that I could meet Jose later on. 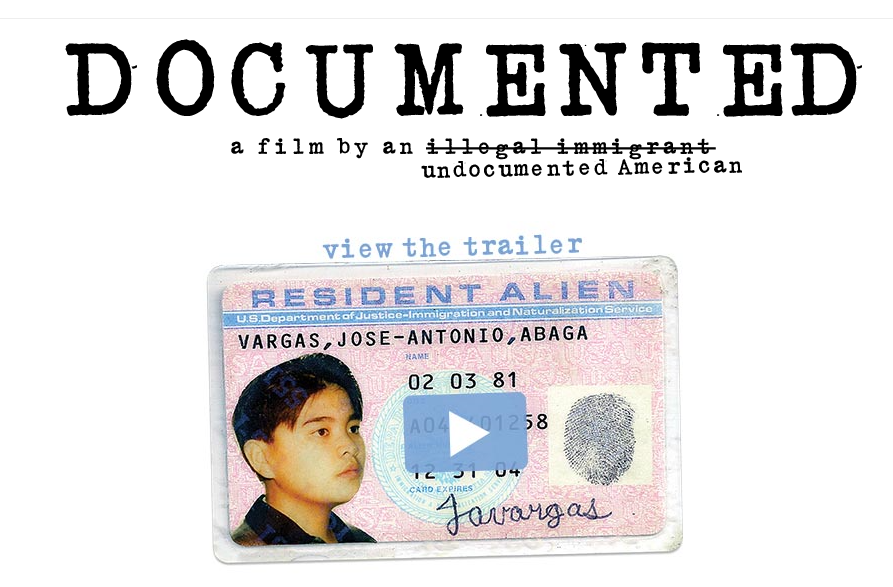 At the close of the film the audience had grown noticeably larger and on the other side of the room I saw a familiar face. Jose received a warm welcome as he made his way to the stage. Among the panel with Jose was Marisol Conde Hernandez (Co-founder of NJ Dream Act Coalition and Rutgers Newark Law Student) and Giancarlo Tello (Campaign Chair for NJ United Tuition Equity for DREAMers campaign and Rutgers FASN student). 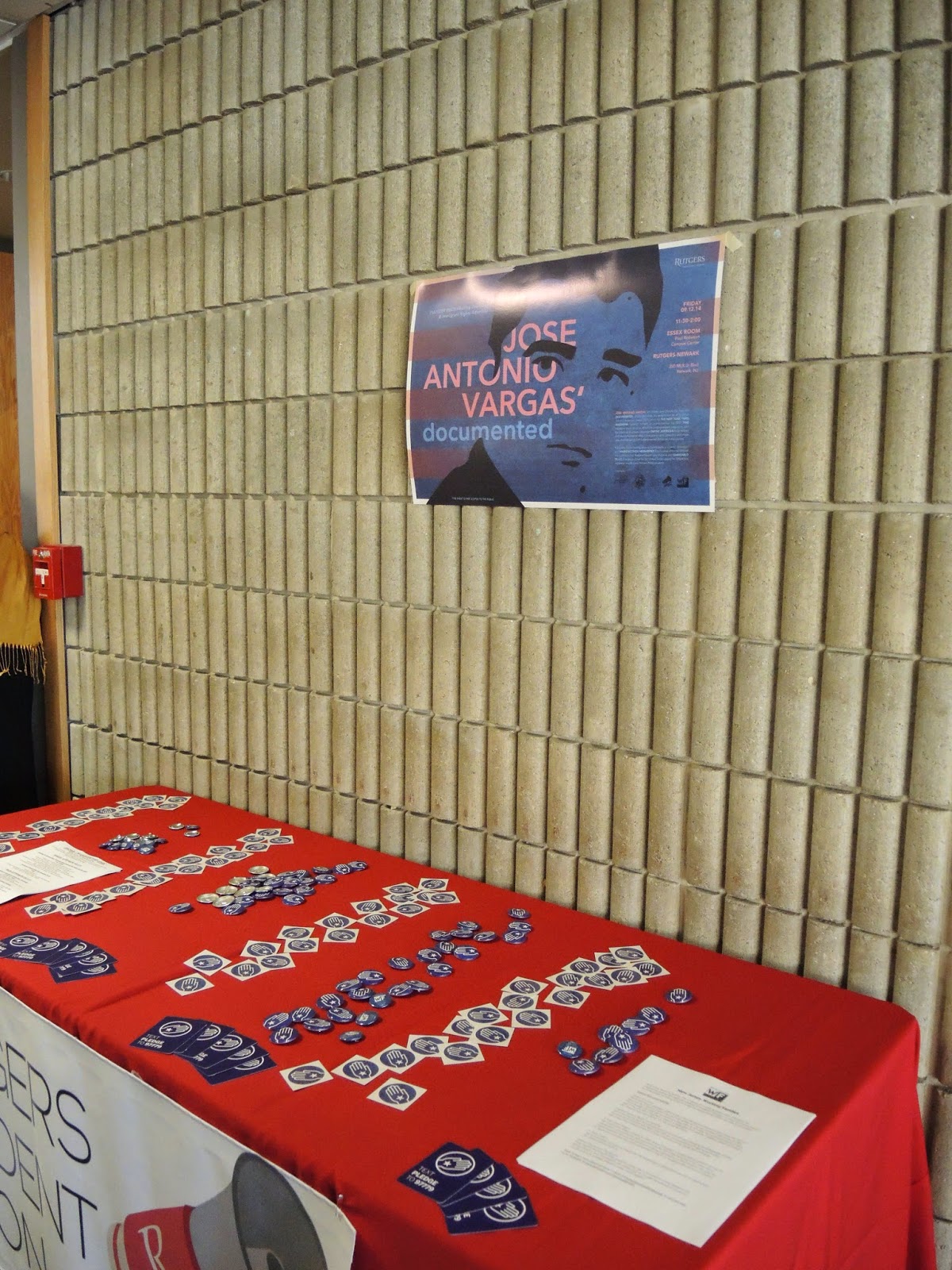 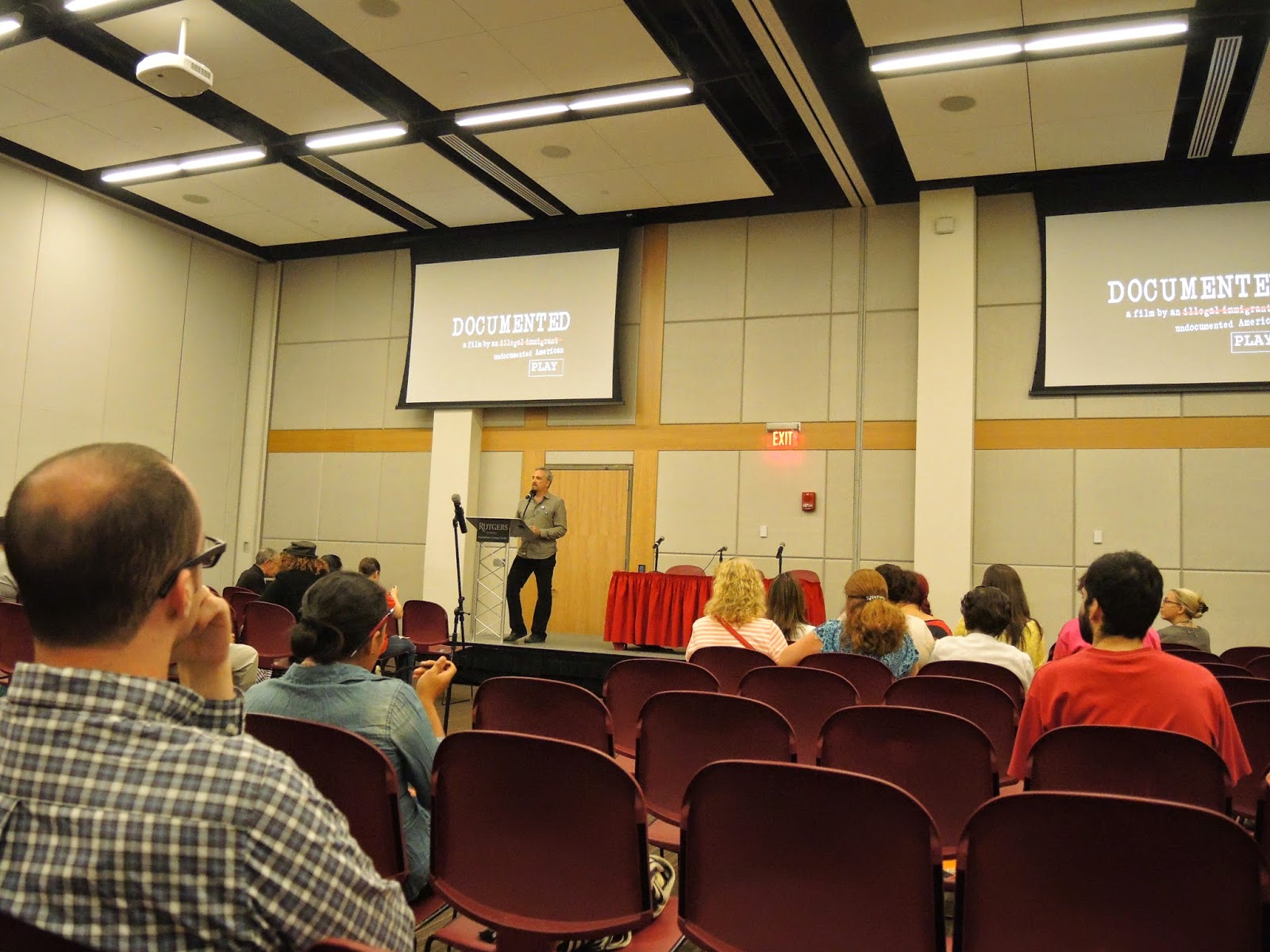 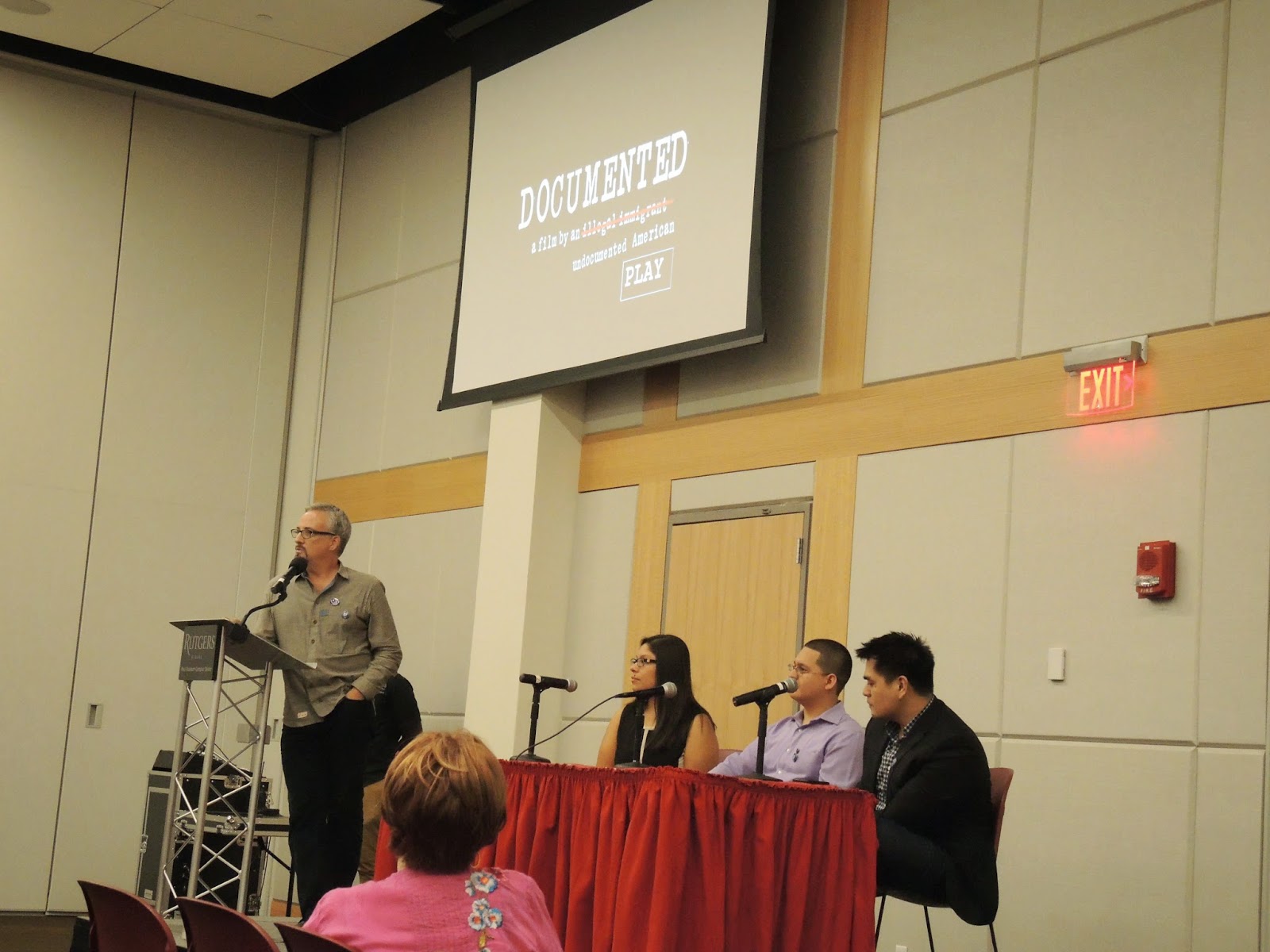 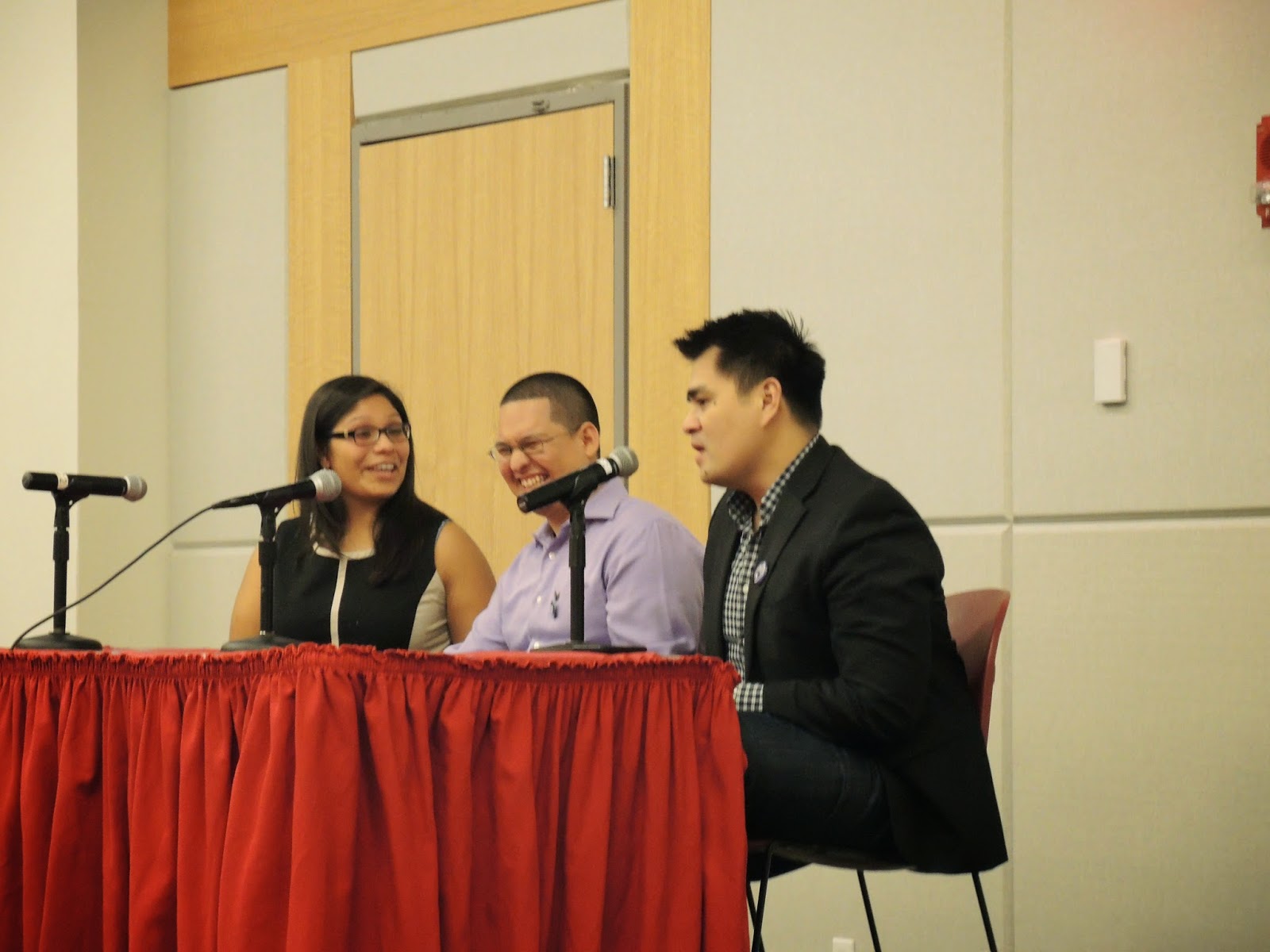 They answered questions from the audience that formed a line behind microphone. I took some hand written notes during the Q & A. Here are the parts that are clear to me after the fact:
Q. With marriage equality, can you obtain administrative relief?
A. Jose – admission disbars one from any admin relief.


Q.  The text under the title of the film “illegal immigrant” is crossed with “undocumented American” underneath. Why?


A. Language matters, it determines the conversation we have. (He might have said he was conscious of this as a writer)


Q. Has it benefited your career as a journalist to be “out”?
A. Yes, the work is richer now than before, it is more honest.
The long line of students waiting to speak to him was awe inspiring. I did not have such an experience being an undocumented undergrad.  I was happy that in their respective situations that they could have each other and also someone like Jose as an advocate. I was also happy that the immigration debate was at a point where the language is more widely used and the climate was such that it was okay to utter the words, “I am undocumented.” Some of them just wanted to tell their stories and express that his work spoke to their hearts. One petite woman tilted the mic to her and told Jose that her English was not so good but said that she was a legal resident. Despite this she has had many experiences where people seemed to question her rights because she was Hispanic. Jose commented that he found it pernicious that the words Mexican and illegal were often synonymous.
An African-American woman also told Jose that she recently visited Great Britain. She said that whenever she told anyone where she was from she was regarded with a certain kind of awe being an American. She told Jose that part of her felt like a fraud because she was “looked up to” by the people outside of the country yet “this” (our immigration issues) was going on in the United States. Jose had a pained and also humbled look on his face. He said that he could not imagine what an African-American woman experienced in our country but was grateful that she could make the connection with him.
Another woman told the panel that time was an issue for her. She was currently undocumented and waiting for her father to sponsor her so she could become legal. She was going to be 21 soon. The process could not happen fast enough as she will no longer be eligible after she turns 21. The panel member Marisol told her that she must work through her anxiety and live her life. Marisol is an undocumented law student and said she has to work through similar issues of one day starting a life with a family. Honestly, this was one of my issues having been undocumented. The anxiety of it all is paralyzing. Forget waiting for the fateful day ICE comes to your door. Working through the anxiety means having to function beyond the fear to hold down a job, be a student or navigate young adulthood.  I believe it took the entire decade of my 20s to “work through” the anxiety. I might have made better decisions without it but as it is, there is no getting back lost time. This woman and I connected briefly since we were sitting in the same row and were both from Pennsylvania.
The panel urged us to do the work towards immigration reform in a grass roots fashion. They said in 1986, the amnesty bill was passed as a result of Irish immigrants that lobbied hard for change. We were in this together and would only succeed together. There was also some mention of the “othering” of immigrants post 9/11 when organizations such as the Immigration Naturalization Service (INS) became the Department of Homeland Security and the US Immigration Customs Enforcement (ICE) was created.
There was strong disappointment towards the President in his delay of an immigration reform announcement until after the November elections.  The disappointment was echoed by the audience. The panel urged us not to be used as a democratic pawn because the issue transcended both parties.
Close to 3pm the Q&A session had to be stopped since Jose had another engagement. I also had to leave since had to pick up my son at daycare 2 hours away. We were told that Define American was recording videos of the audience if they wanted to share their stories with Define American. When Jose walked towards Rev. Eller, I was introduced to him after several members of the audience got up to shake his hand. In my mind, I wanted to greet him in Tagalog and express my reverence, excitement and respect. In reality, I responded like a 12 year old responds to her favorite activist. I must be honest, nothing intelligible came out of my mouth. I believe I said the words “Filipino history”, “blog” and “stalker”. I don’t even remember telling him my name. There is a reason why I am not in the field or marketing or the “front man” when engaging a conference room full of colleagues.  I did exchange information with Jose’s team so perhaps it won’t be the last time we meet.
In the end, it is my shared history with Jose as Filipinos and our respective work towards the same end that keeps our fates intertwined. Apart from politics, this issue is about keeping families together. As much as Jose said “language mattered”, I wish for the day he and his mother are reunited.  Like my son and I do every day, they’d hug each other and wouldn’t say a thing.

Some interesting information I learned about Rutgers and NJ while I was there:
·         Governor Chris Christie approved the Dream Act in Jan 2014.
·         Undocumented students are qualified for instate tuition under the premise that they attend a New Jersey high school for at least 3 years and earn a high school diploma or equivalent. They must also sign an affidavit saying that they will adjust their immigration status as soon as they are able to do so.
·         Rutgers University is the second institution to provide financial assistance to undocumented youth. Financial aid was not part of the bill that Chris Christie signed.
at September 18, 2014