The Rough Trail 50k was a necessary for me. My 25k experience 2 years ago left much to be desired. I had a cold and Trump had just won the 2016 election. My world was turned upside down, by choice, since my family and I had just moved to the Kentucky. I signed up to do races as a way to channel the stress of relocating across the country. I knew it would give me a chance to the know the area, driving to these events, and get to know the running community.


I survived the 25k. I was on my feet for more than 4 hours. As hard as this was, I knew I could run another marathon.  I was a little broken but I crossed the finish. I blogged about it and one of the women in the running group commented that it sounded like I did not have fun. She wasn’t wrong. The 25k course was fucking hard. The race itself was redeeming because despite my inner grouch, it was a perfect day for a race. The Gorge was magnificent to behold while it was kicking my ass.

I was afraid to sign up for this race but I was in search of a fall 50k. I needed to not be afraid of this course and redeem last year’s 50k. I got lost and ran 3 extra miles. I didn’t have the strength in my legs to make big descents the last 10 miles. I also lingered too long aid stations.  With my three extra miles, I was out on the course after the sun set. One of my goals for this race, maybe the only goal was to finish before the sun went down.

I weight trained having learned all this. I had never really cross trained while training for a race before. I didn’t know how or maybe I didn’t have the fitness. I could only either run or weight train. Mostly I needed to be strong. I went back to the Uplift training plan, created by a fellow runner from my old running group. She is also a body builder. I wasn’t too worried about getting a certain number of miles in every day. Just like training for Grandma’s Marathon, I aimed for cumulative miles by Sunday.

I rode my bike all summer. It was hard to go back to running. I kept telling myself that if I kept at it, the glorious full body fatigue, serotonin high would come with running too. I Just had to get through the first 5 miles of pounding on my joints and the Kentucky heat. I was hoping muscle memory would kick in and it did. I remember texting a friend saying that I had reached a point in my training where I wanted to run every day.  I became efficient again and my brain was addicted to the serotonin.

I am fortunate to be able to work from home. During my lunch breaks or in between teleconferences, I weight trained with my body weight. Each routine lasted about 20 minutes. On some weeks I did this with my running miles. I went from 20 m week to 30 m week to 30 plus miles at the peak of my training.

Earlier this year I had some blood work done with a yearly physical. I found out I had high cholesterol. My doctor advised me to stop eating fried foods and take a krill oil supplement. I switched to vegan cheese. I ate more beans and less meat. I lost 1 or 2 pounds, which I was grateful for since I wanted to weigh less overall for the race.

The longest run for a 50K is about 26 miles. Due to weather, scheduling and my general desire to not be gone from my family that long, I ran 5 miles on a treadmill Friday night, 22 miles on Saturday morning and 3 miles the following Sunday. I was ravenously hungry in the days that followed. This was 2 weeks before the race.

The weekend before the race I biked an easy 30 miles and ran 10 miles with friends on Siltstone. Biking was a mistake since my quads were very tight afterwards. I also felt fatigued during those 10 trail miles. My rationale for the bike miles was that my boys were away for the night and I had some “me” time. I also took it easy. I was attempting to not consume alcohol before the 50k. After my 10 trail miles, Kaitlyn and I heated up some sweet potatoes in the toaster oven and sat on the kitchen floor eating from the tray. They we each had a beer.  I think the alcohol helped loosen me up, especially the quads that had hardened after my bike ride.

The week before the race was all rest. My hubs was traveling for work most of the week. I spent my active days raking and bagging leaves. I made a playlist for the race and used a foam roller on my quads.

I took a half day at work on Friday. I carpooled with friends to a cabin near the start/finish of the race. There were 9 of us in the cabin. All 9 of us brought beer for before and after the race. I had 2 beers with my dinner Friday night. I have never drank before a marathon or ultra marathon. Dinner was ultra-bland, boiled potatoes, boiled chicken and steamed broccoli

I Zentangle-ed in honor of Bob. I also wrote Gerry’s name on my hat. Maybe its superstitious but I talk to them when I run long distances. I hope that they watch over me out there. There’s always a risk in trail races. The terrain wouldn’t be easy. I would be running up mountains, down ravines and passing cliffs. I also knew I would be out there for hours. As much as Gerry and Bob were a part of my pre-race, I placed faith in myself. There was no room for doubt and negative thoughts. This mental component was the most critical. The body was a vessel for the indomitable mind. The mind only knows the progress forward towards the finish. 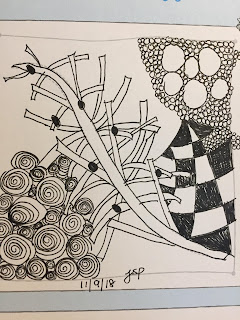 I set my alarm for 5am. The race started at 7am. I had 2 hard boiled eggs and 2 boiled potatoes for breakfast. I also had coffee. I had not driven my car since my family was going to meet me at the end of the race. We had planned on driving home together. I needed to eat my breakfast and pack everything in Chris and Amy’s car.

It was cold when we started. I started of slow until I warmed up. It had rained days leading up to the race so the course was muddy. The first aid station  (Auxier ridge) was at the 8-mile mark.

There was a 10 hour cut off for this race. I had anticipated chasing it because of the difficulty of the course and my Strava data from the Jackson 50/50, which was around 9 hours on my feet.  I had packed my headlamp hoping that I wouldn't have to use it.

I ran the beginning of that race without stopping. I did not take my phone out for pictures, I didn’t linger at aid stations and I didn’t stop to talk to the other runners. While I was feeling strong, I was not going to stop. I had planned on running when I could until the terrain made me walk.

I ran into MRTT friends Amy and Amber at around mile 15. I ran with them for about 10 miles. Maybe it was good to be with them since I had been by myself for a while. Amber called me "Jenny" a few times, which I normally dislike from anyone except my family but I loved it coming from Amber.

Some of the climbs were never ending (hard as fuck). I am happy to report that weight training helped. My legs were never totally exhausted. I was tired at 4 hours. I was also cold.  I did not account for the time I would be walking and climbing. I kept myself warm by telling myself not to stop moving. I took my inhaler twice in the time I was out there. I felt the cold most in my lungs, not sure if it was cold or fatigue. Maybe it was both. I was running alone near the end. Amy and Amber were about 5 minutes ahead of me and I wasn’t keeping up with them. I couldn’t.

At the Sky Bridge aid station, I was thrilled to see my friend Jeannette, who completed the 100 mile race earlier this year. Another MRTT friend Susan refilled my water bottles as I blabbered on about probably being dehydrated not having peed for several hours. I ate pbjs, cheese crackers, m&ms ad potato chips. It helped with the cold.

I have no recollection of any low points (mostly cold points) except maybe the end when I kept wishing to be at the finish line. I couldn’t wait to see my boys, be warm and drink the beer I had put in Chris’ cooler for after the race. I was tired of pbjs and race food.

I was thrilled to have crossed the finish not having to use my headlamp. It was around 9 and half hours. I had given that race everything I had. I look back on it as a successful race. I can’t remember if I ate anything afterwards. My son gave me a Twix mini and I did drink that beer.

We drove to Lexington and I had pizza and beer with my sisters in law. I also took a hot shower. My hubs was running the Louisville Marathon at the Parklands the next day so we needed to get home. I went to bed promptly.

The most amazing thing the next day was being up and about. I unpacked my things, washed the mud off my tights, shoes, socks and gaiters. I also made soup. Despite the way I felt during the race, I was happy I didn’t get a cold or some respiratory infection.

This race marked the passage of time for me in Kentucky. It had been the 2 years since the election of President Trump. A few weeks ago, I heard Julian Castro being interviewed on NPR. He had just released a book. He said it would need to talk to his wife about running for president. I like Mr. Castro very much. More than anything I felt hope unlike this time two years ago. Two years ago, I didn’t have running friends in Kentucky. On race day I was surrounded by people that knew my name, who I ran with leading up to the race and waited for me at the finish with big smiles and open arms.   This race proved I could circle back and evolve. It was a way for me to connect with Bob and Gerry and continue to heal from their passing. Lastly, that MRTT member who said did not have fun is now a close friend if not the best one I made since moving here. In writing this, I get to tell her that this race was so many things but most of all, so much fun.