After last year’s 40th birthday weekend in Duluth, MN for Grandma’s Marathon, I didn’t think any birthday could be better. The events leading up to the race, the race conditions as well as the race I ran was perfect! I was wrong. This year, my birthday fell during our family vacation in Italy.

We flew from Northern Kentucky/Cincinnati (CVG)  to Newark (EWR). After a 2-hour layover, we continued to Naples (NPA). It feels strange chasing daylight but that is exactly what we did. We were served dinner on our flight with United. Then they closed all the windows and dimmed the lights since it was nighttime in the East Coast. We sat in the middle row so my 7 year old put his head on me and his feet on my husband. I might have slept a few hours sitting up. After some simulated sleep we were given breakfast. I don’t remember what, my husband though a croissant.

We arrived at about 7:30 am. Naples is a small airport. We got off the plane via a ladder and traveled to the arrival gate by bus. When we arrived at the airport building, we were fortunate to be a family with a young child. We were led to the shorter line where our passports were stamped as we entered the country. As we waited for the rest of our family to get their passports stamped, the three of us went looking for our luggage.

Although it was bright and sunny in Naples, it was past midnight east coast time.My son was pretty tired.  He sat on my lap and played games on my ipod.I was thankful for my sister in law’s sons, ages 21 and 18 that were with us, so despite my son’s exhaustion he was still “playing” with his cousins.

The distance between the luggage pick up to where Angelo, my husband’s cousin’s husband was waiting, was only through a set of sliding doors. We greeted each other and made our way outside under an awning. Angelo went to get his car and my husband, also named Angelo, went to retrieve our rental car.  As we milled around, I went back inside to get my son a croissant, bottled waters and cash from the ATM. The exchange rate at the ATM was about 1.25 dollars per Euro, plus a few dollars ATM fee. A 300 Euro withdrawal was equivalent to 383.30 USD (June 2019 FX rate).

After a while, it seemed like a long time, Angelo had gotten his car from the parking lot and my husband Angelo had gotten our rental, which was a silver CLIO. It sat 4 adults and my son. We had requested a car seat but there was none in the vehicle. We did not follow up on this item. The GPS my hubs requested was built into the car. I entered Foglianise, not an exact address. The town is very small and my hubs would know his way once we arrived in the town limits.

Driving there was hairy. There were lots of small cars passing each other on the road and the mountain roads made it look like we were driving off a cliff sometimes. It was great to finally arrive. The house we were staying at is the house where my mother-in-law grew up with her 5 siblings. We declared our rooms and proceeded to mill about as lunch (pranzo) was prepared.

My son ran around the small grassy areas underneath grape vines, cherry trees and figs. He might have picked a few cherries and eaten them. I marveled at the view surrounding us. Foglianise and the surrounding towns are built on mountainsides. Every time the sun shifted, some piece of the earth next to us always looked spectacular. 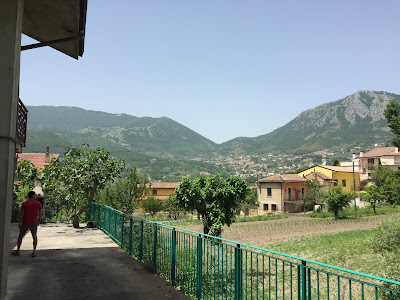 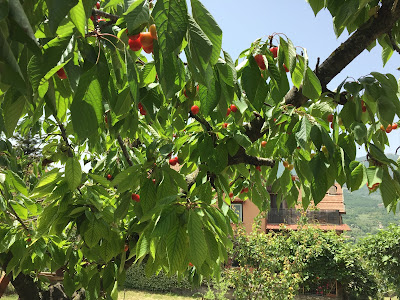 Pranzo consisted of an antipasto (cured meats), bread, pasta with red sauce, pork tenderloin topped with roasted carrots and cherries from the garden. There was also wine made by Zio. Afterwards, our group of travelers headed back to our rooms for a nap
We stayed in Foglianise for two days. In those 2 days, we exchanged our dollars for Euro, got settled in the house that had not seen any occupants for months, visited relatives and made our travel plans to Rome and Pisa. We bought train tickets through FC Travel. It is owned by my husband’s cousin’s son. We often went to Granchio Nero Cafe, also owned by Angelo’s cousins. 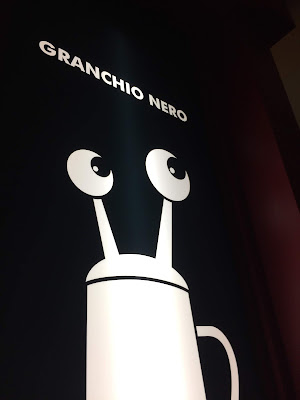 There were 7 of us so we opted to visit cities by train. We traveled to Pisa from Benevento. We stopped at after 2 hours Rome to switch trains and get lunch. It was another 2 hours from Rome to Pisa. We walked from the Pisa train station to our Bed and Breakfast. We stayed at B&B I Botai. Everything on their website is true to our experience! We loved our hostess, the goodies she baked, our rooms and the whole experience of being there. I fantasized about just living there. Here are the items Veronica prepared for us every morning. We usually filled up at breakfast and had a snack during the day (a slice of pizza or gelato) from the local shops. We were walking every day so it was easy to stop somewhere. 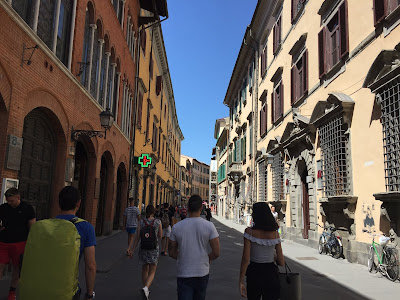 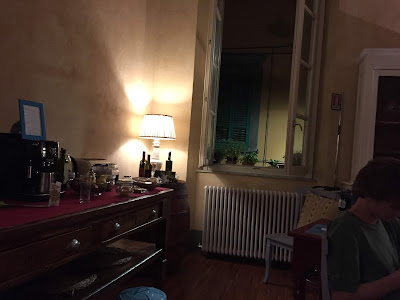 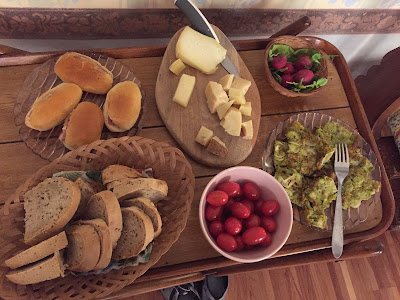 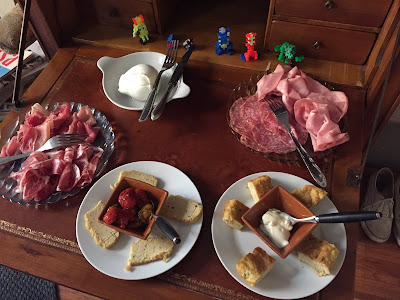 On our first full day at Pisa we saw the Tower. We walked around the city looking into churches, the university grounds, Santa Maria Della Spina right next to the river. 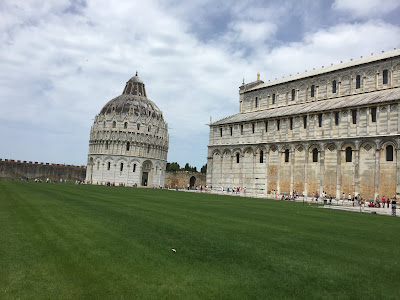 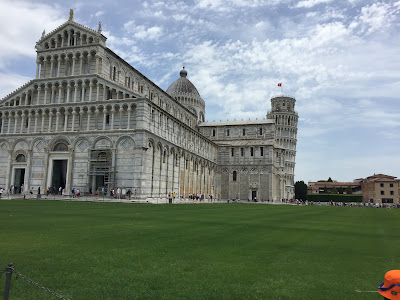 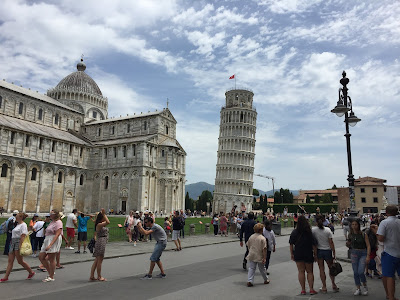 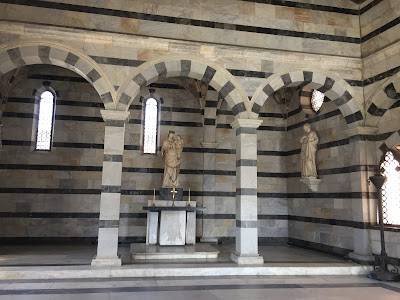 The first night we had dinner at Al Signor Mimmo (Trattoria) located on Via Domenico Cavalca. I am pretty sure everyone else enjoyed their food. I took pictures of mine. We might have thought that the wait staff was unfriendly but honestly being in Italy outweighs any negative. I I had grilled octopus and grilled vegetables. It was wonderful. We sat outside under a grapevine. We were tired and hungry and my octopus was delicious, maybe the best I have ever had.
The second night, which was my 41st birthday, we ate at la Sosta dei Cavalieri located on the same road as our Bed and Breakfast.  I had coniglio, rabbit with fagoli and fungi (beans and mushrooms). 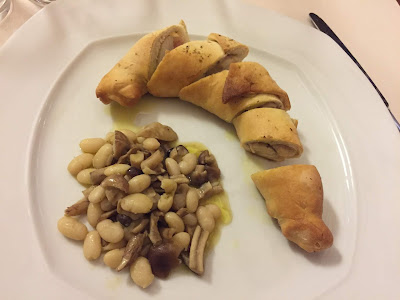 My son had a giant plate of mussels, clams and pasta. This establishment had white table cloths and superb service! Perfect place for a birthday dinner. I was a little nauseated this evening, possibly from the heat and my body adjusting to the different time zone. Pepto pills were especially helpful to calm this and went away after we sat down.

In Rome we took a train to St. Peter’s Basilica. The line to enter was long so we lingered in the courtyard and meandered towards our hotel. We saw Piazza Navona. In that piazza we entered a church called St. Agnes of Rome. I purchased souvenir for a friend with a daughter named Agnes.  There was also a man blowing bubbles so the kids could chase them. We also saw the Trevi Fountain, which was guarded heavily.


First night in Rome we had dinner at La Forchetta d´Oro on Via di S. Martino de Monti on the same street as our hotel Tirreno.  There was an accordion player that came in from the street to play for us and requested change afterwards followed by a rose peddler. I had chicken roman style, which reminded me of Filipino afritada.
In the morning we had breakfast at the hotel. They had croissants, cured meat, american cheese slices, yogurt, and weak coffee. It wasn’t like Veronica’s meals but passable. Lunches were like Pisa, eating pizza from store fronts in the plazas and ancient streets we strolled.
The second day in Rome we walked near the Coliseum also did not go in since the lines were long
and it was over 90 degrees. We saw a church dedicated to St. Frances of Rome, a church I
sometimes go to here in Louisville. Her remains were displayed underneath the altar. I took pictures of her remains  for my friend Lynne (probably blasphemous). We went into Santa Maria Magorre. My son and I lit candles for Gerry and Bob, actually we did this wherever we could. In Santa Maria, I placed their names in a box of prayer intentions. I was told the bathroom at this church was spectacular. My husband and son made a donation to be able to use it. 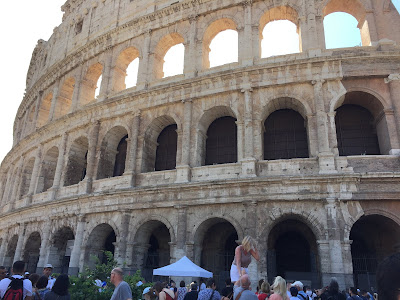 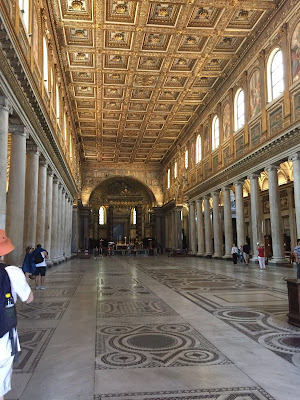 Second night in Rome we had dinner at Casa Maria located in Piazza di. S. Maria Magorre.
The same rose peddler came in and was chased away by our server. My son was especially '
embarrassed since the server, sweet she seemed, that demanded a kiss from him (as she did from
all adorable little boys, she told us proudly). I was sitting next to him so I did not see his face turn
bright red as reported by his cousin sitting directly across from him. I had a salad with eggs and cheese. He asked me to hide him in my purse before we left.

Our train from Rome back to Benevento was not scheduled to leave until almost 5pm. We sat in the
hotel lobby, even though we had already checked out, and waited. By some stroke of luck, our
compartment on our ride home was in first class. We were served bottled waters and biscuits.

We were met by Angelo’s cousin Lorenzo. He and his wife gave us a tour of Benevento that evening. It was my favorite part of the trip mainly because we did it in the evening and it was cool. There were no peddlers or other tourists. At the end of that day we had pizza.  From there, we were driven back to Foglianise. My son was exhausted while his cousin told stories of the kids hiding their grandfather’s belts and underwear all over their house. We laughed uncontrollably at “pobre Nonno”, poor grandpa, finding his belt in the bathroom and his underwear on the front porch. We were happy to be “home” in Foglianise that night and the following day. We had loads of laundry that we washed and hung to dry.

On our last day we had pranzo at Angelo’s uncle’s house in Benevento. My son got to swim in their pool and we marveled at the home. I thought the antipasto was the most beautiful i had consumed at the trip. We purchased some souvenirs sporting Benevento’s soccer team.

We flew from Naples to Newark. Our flight was delayed leaving Naples. We missed our connection out of
Newark. There were rain storms on the east coast that day. We were told 80% of the fights leaving out
of Newark were delayed.  My sister and law and her boys took a flight to chicago that night so they
could get to Lexington the next morning. We opted to stay in Newark that night and get a flight back to
Cincinnati. After 36 hours of travel, home was as wonderful as the trip. 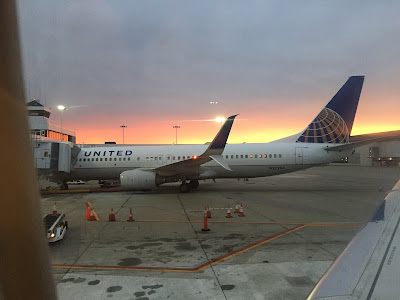