One Tribe - An Examination of Stanley Karnow’s - In our Image: America’s Empire in the Philippines - Part 1

While you’ve been reading some of my posts about cats, yoga, chocolate and other randomness, I finally did finish this book. The reading of this work has been an enormous undertaking. It’s not the size of the work (although I might also be able to conquer a small island armed only with this book) but 400 years of a rape of an island, rape of a culture and rape of the Filipino psyche. I undertook this book in an effort to follow a rabbit down a hole. Primarily, it was a recommendation from Scott Walker, author of Edge of Terror, previously reviewed on this blog. Second, I wanted to know why my mother’s birth certificate was destroyed during World War II.  Lastly, I sought to know about the rule of the Spanish and the Americans as a means to understand the “why” of the migration of my family from the Philippines to America. What I got was a mixture of war, politics, economics and culture. It makes sense that those things come into play since the reasons behind something as complex a human migration live in the decisions and actions of multiple generations, spanning multiple continents and how those stories, our stories, intersect. It was amazing to learn this history, yet I am fatigued by the images in my mind of war, poverty, imperialism and subjugation. Having lived through the People Power Revolution led by Cory Aquino or “restoration” as Mr. Karnow describes it, was just the tip of the iceberg. 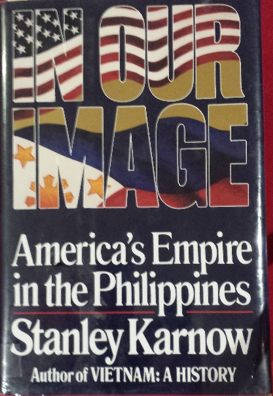 Mr. Karnow has a very engaging writing style.  It’s probably the thing that got me through his thorough and very impressive book. At times it was like reading war segments of Lord of the Rings. There were several instances of armies traveling, landing on a particular coast and engaging in battle. There were many accounts of unforgiving jungles and terrain that decimated foreign armies and natives alike. Yet the same jungles and terrain protected its inhabitants foreign and native alike. These conflicts were first waged with swords, spears and shields in the 16th, 17th and 18th centuries, guns in the 19th century and finally politics, psychology and economics in the 20st century.  Actually, those last three occurred early on as well but more subtly with the hand to hand combat in the forefront.

When reading about the rule of Spain, Mr. Karnow described it as “feudal” with plantation overlords and indentured servants up until the 19th century. This feudal climate and revolution on the brink was the backdrop of two works by Dr. Jose Rizal reviewed in this blog.
I was particularly intrigued with the history discussed before Spain. In some ways I view it as the purest of our history before the involvement of imperial powers. This is where I want to begin my discussion.

In our earliest history, Mr. Karnow talks about the Philippine people as a tribe that “belonged to no social group larger than the village, which was in fact [their] family”. He described us as clans with a male chief living in villages where most quarrels happened with each other. Such disputes were also resolved by the male chief. These tribes were a self-contained system of checks and balances and had the ability to settle disputes, take care of its very young members and also it’s elderly. The Philippines being an archipelago isolated such clans from each other. They had no idea (or concern) that on the other side of the world, the Crusades were being waged.  This was an effort to restore Christian access to holy places in and near the Holy Land. As a result empires grew and waned. Eventually, the dark ages saw the dawn with the Age of Exploration. In 1460 the Catholic pope issued the Inter Cetera, granting Spain rights to explore lands west of Europe. In the same vein Portugal was granted the right to explore lands east of Europe. In 1493 the next Pope granted Portugal the privilege of Christian Crusade, considered holy writ of exploration. For a reasons that will not be considered in this essay, a Portuguese explorer Fernão de Magalhães aka Ferdinand Magellan sailed for the Spanish crown. He and his crew sought out spices, lands and prestige. Magellan and his co captains were promised 1/25 of the profits should they return with a cargo full of cloves, cinnamon, ginger and sesame. Their progeny were also promised the rights to rule lands that they “discovered”.

After a year at sea, Magellan and his men depleted their supplies. They ate rats, sawdust, and cowhide off their yard arms. Their water, mostly likely untreated as my husband points out, turned yellow in purification but they drank it regardless.

One of Magellan’s crew, Antonio Pigafetta, wrote “had it not been for calm seas that allowed them to travel great distances and reach land, they might have all perished from starvation”.  They “discovered” the island of Guam in March 1521. They were greeted by cheerful natives that stole everything they could from their boat.  Magellan and his crew stocked up on provisions and left as quickly as they could.  As a reader, I might think this was an indication of things to come, except their roles would be reversed and the value of the items stolen would be vastly immeasurable.


Magellan soon spotted the island of Leyte. Magellan called it the archipelago of San Lazaro, for Lazrus, whom Jesus resurrected as they had also been brought back to life at the end of their harrowing journey.  Magellan also saw the islands of Samar and Mindanao before he set foot on the island of Limawasa. Despite orders to stay on his ship, Magellan went ashore with 50 men to celebrate Easter. He erected a cross explaining to the natives through an interpreter that it would protect them against evil (however Magellan defined it).  Mr. Karnow also explained that the gesture was intended to confirm Spain’s claim over the area. Two chiefs, unaware of the mass’ meaning, partook in the mass.  Perhaps they were humbled by its simple and profound ritual, the way I am to this day.

Magellan wished to convert the natives to Christianity and rule as a viceroy of Spain. A local chief Humabon feigned interest in such a plan and both parties exchanged gifts. Humabon gave rice, pigs and chickens. Magellan offered silk Turkish style gowns, a red cap and a pair of gilt cups. Magellan’s crew was sent to Humabon’s palace to deliver such gifts and explain the benefits of Christianity. Prior to leaving, one of Humabon’s nephew’s invited them to his home to be entertained. Women, topless and some nude, danced and played musical instruments. Pigafetta wrote that they were “very beautiful and almost as white as our girls” (I will revisit this in a later post). He left out further details of evening for discretion.

In April 1521, Humabon was baptized and re-named Charles after the Spanish king.  Humabon’s wife and entourage were also baptized.  The villagers underwent the same ritual to emulate their leader. Magellan did not understand that Humabon’s influence was limited to a handful of villages. Magellan directed the local tribes to pledge their allegiance to Humabon who would represent the crown of Spain.


Magellan in his arrogance thought that his men armed with guns, lances and swords could overpower naked natives wielding knives, spears, bows and arrows.  He mobilized 60 men with minimal armor.  Humabon brought 600 men but they did not partake in battle under orders from their “shepherd.

Tribes, disparate yet connected as they were, communicated the impending offense to Lapu Lapu. Upon learning of the attack, he mobilized 1500 warriors among the other clans. He told them that foreign intruders had smashed their idols and imposed a strange religion. It’s not unbelievable that our tribes, naked and crude would be led to war so quickly to restore tribal access and traditions in and around their archipelago. They sought to protect their families as Magellan sought to protect his newly Christened flock.

Magellan’s men arrived on the shores of Mactan in the very early hours. In the low tide, their boats were unable to get too close to shore leaving their mounted cannons out of reach. I imagine tropical mist on pristine blue beaches, still dark with the sun not fully alight. It might have been enough cover for the warriors that waited for them. I’m not sure who made the sound louder than the lapping waves before the ocean water turned red and the silence erupted into opposing armies uttering the unintelligible Rage that drives men into war. Lapu Lapu’s force thunderous in their defiance and Magellan’s men equally valiant perhaps shocked by the force that waited for them. The Europeans used their muskets and crossbows but in vain as the savages slaughtered the knights, under holy writ of exploration, abandoned by their God.  Magellan in the midst of the chaos and slaughter, ordered his men to retreat. He covered them, injured and looked back many times to make sure they could escape. Perhaps he questioned his Catholic king why he would grant such access to undoctrinated lands so that he may be slaughtered to give rise to the capitalist kingdom come. The few that survived it called Magellan a martyr.

They had no inkling that their numbers would also be slaughtered under the hand of their newly Christened Charles, disappointed by their ability to subdue the heathen Mactan king.

At this stage of the story, it seems like the explorers landed and both parties employed guile and violence until very few of the explorers returned home to document the events. I’d like to think we won, yet it was the “discovery” of Magellan’s crew that opened the door for a more “civilized” people into my country. What seemed like equality in hand to hand combat would never happen again. My people weren’t going to stand a chance against the imperial powers that found their way in our lands and altered the course of our history. As a colony, we were made into their image, distorted and becoming what we were not (Quinano 2000).