I finished a book this past holiday season entitled the Edge of Terror by Dr. Scott Walker. This is the third book I have read this year on Philippine history. I was intrigued by the topic knowing my mother’s birth records were destroyed during the war. Also, in speaking with my grandmother before she died, I learned she was a war bride while the Japanese occupied the Philippines. She was married in secret on top of a mountain.  She told me in Tagalog (pronounced tah-gah-lawg, tuh-) it was a scary time. After having read this book, I understood more about “scary”. 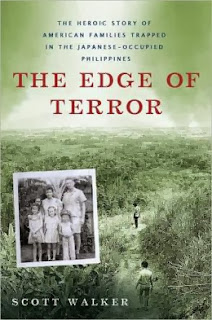 I have to preface this post by saying that I am a product of the New York State public school system. I was a fine student having taken the Global Studies Regents exam. During that time, I do not remember this topic being covered. There is so much to cover with regard to World War II that I might have missed it.  I might have been more concerned about everything else that went on during high school.  I don’t know for sure.  Also, the teachers have to cover so much about the world that more than likely they couldn’t cover World War II in depth getting ready for this exam, which was 2 school year’s worth of global history.

The Edge of Terror touched upon the rationale and history that led to Japan occupying the Philippines. More importantly, it relayed the journey of Americans and Filipinos that had to live through very dark times. In my effort to connect to Philippine history outside of the country and also outside of the Philippine education system I find it is these stories that help me make the connection between the 1940’s and present day. (Other than my mother’s birth record being trashed during the War and me having to go look for something else in its place.)

The book is primarily about American miners, physicians and missionaries that made their lives in the Philippines. With the help of Filipino soldiers and civilians, some of these families evaded capture, internment and ultimately death by hiding out in the savage Philippine terrain.

In order to set the stage for these stories, the book outlines Philippine history beginning with the Spanish rule. It talks about Dr. Jose Rizal, a Philippine hero, who I only recognized as a name of a park in Manila, where my parents took me as a child. 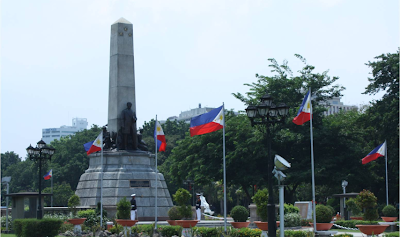 (Luneta as the locals would say or Rizal Park in Manila, photo also courtesy of Google)

The author talks about why and how Dr. Rizal led a revolution towards independence from Spain, sort of unintentionally and why he was eventually executed. It talked about the revolutionaries that came after Dr. Rizal and how they organized against the Spanish until the United States declared war on Spain in 1898. After the Spanish Pacific Fleet was defeated by the Americans, the Americans sought to rule the island nation in place of Spain, even as Filipinos sought their independence and declared their country a Republic. The war between the Americans and Filipinos was brutal and many lives were lost on both sides as the United States secured its territory.  After the Filipino-American war, US military rule was replaced with a more benevolent rule where a Philippine government was created after the US government. Also, the American Bill of Rights was extended to Filipino citizens.

Dr. Walker echoed historian and writer Stanley Karnow that wrote about an America that sought to transplant their values and institutions in other lands, “remolding other lands in their image” and how it was an exercise in self deception. It is this vision that brings American teachers, doctors, missionaries and miners to an archipelago that became mired within the war between the world’s superpowers.

The book goes on to give a back story of some of the families that came to the Philippines and the various reasons why they came. The book then discussed General MacArthur and his connection to the Philippines beyond that of a military commander. The book also talked about Jonathan Wainwright, the American general who stayed behind as General MacArthur and his family evacuated to Australia under President Roosevelt’s orders.

MacArthur was called upon to defend Australia and plan a counteroffensive against the Japanese. Upon MacArthur’s departure the book describes the plight of American and Filipino soldiers on the Bataan (pronounced buh-tan, -tahn; locally bah-tah-ahn) Peninsula as they were captured by the Japanese. The author gives statistics of approximately 10,000 Americans and 62,000 Filipinos that were forced into the “Bataan death march”. Approximately 2,300 Americans and 8,000 Filipinos died of exhaustion, hunger, illness or execution before they reached their prison destination. About 2,000 Americans escaped into the jungle or into the water across the 3 mile ocean channel to Corregidor Island. Some escaped by boat and others managed to swim. 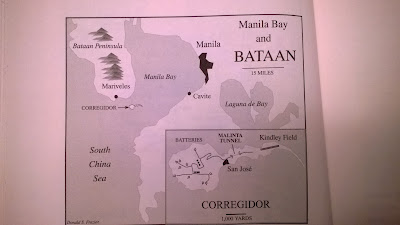 (really bad but necessary photo of a map in the book,  courtesy of my phone)

During this stage of the book, I felt like I was reading more about the Ottoman Turks battling Crusaders with medieval weapons rather than a modern war. The author described horrific displays in cruelty by the Japanese in order to terrorize Filipino civilians as part of subjugating a nation into submission. I felt fear in my heart that must have helped drive the US as a nation to inter its own Japanese residents; some being American citizens in camps across the US. I am saddened by history knowing some principles of the Bill of Rights were not extended to the Japanese within the borders of the US. I also have to ask the question of why German-Americans were not interred while Nazis committed war crimes?

In addition to the Bataan death march, the author talks of the battle at Corregidor Island. The author referred to it as the new American symbol of the Alamo in the Pacific.  In addition to the military history, the author inserts firsthand accounts from both military and civilians that were there before the island fell to the Japanese. Through these accounts, the reader got a more sensory experience of the battle through the eyes of someone caring for the wounded and the terror of living through the nightly bombing of the island.  After this battle, the United States formally surrendered to the Japanese. This was General Wainwright’s decision in an effort to save more civilian lives from slaughter.

Even though the Japanese took Manila, the Philippine capital on the main island, it was impossible for the Japanese to take all the islands. It is this that allowed the Americans to hide in the jungles of Panay Island, south of Manila. There they made a home called Hopevale, protected by the land and the Filipino people. 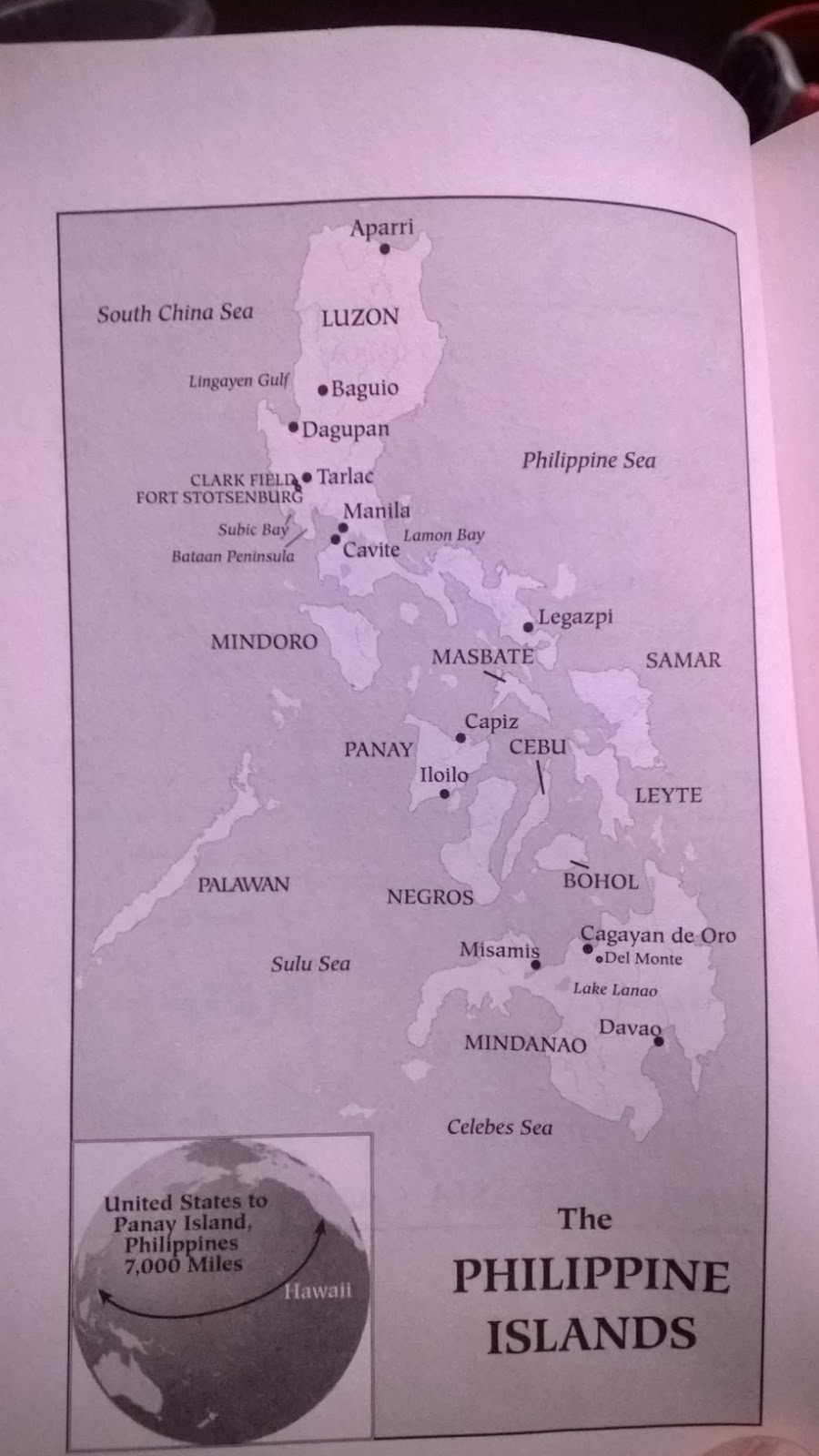 (another really bad but necessary photo of a map in the book,  also courtesy of my phone)

Meanwhile, other Americans were interred in the University of Santo Tomas, the most elite Roman Catholic university in the Philippines, transformed into an elite prison camp by the Japanese. Here the occupants ate an average of 900 calories per day. If you have ever been on a diet, consuming 1200 calories in order to lose 1 pound per week is not comfortable. At 900, those prisoners were slowly starving.

It is here the author talks about the physical and psychological plight of the Americans in Hopevale as they waited. They waited to be rescued by the Allied powers and at the same time, they waited knowing the Japanese would close in on their jungle sanctuary. The Japanese did what the author called “penetrations” as a means of exploring islands not under their control with the intent of killing, capturing and gaining control of the island.

These families did their best to live out their lives. They mourned the death of their friends, murdered in war. They forged friendships that would ensure their sanity and survival while suffering tropical illness, skin infections and malnourishment as their food supply (and shoes) diminished. Despite it all, they survived to be rescued. One family even brought new life into the world. This I must highlight, having given birth in a Main Line hospital in the suburbs of Philadelphia. I cannot imagine this process in a straw hut in the middle of a jungle with the crudest of medical instruments. A physician was there but the situation did not include an operating room or Neonatal Intensive Care Unit in the event something went wrong with labor or the health of the child.

When the Hopevale residents discovered that the Americans had returned for them, they walked risky terrain with a 2 month old baby to get the submarine. They were taken aboard by a Lieutenant Commander knowing the sub would be beyond its capacity. Nobody in the group was left behind as the Americans won back the Pacific front.

It is obvious through the author’s account that he had a connection to the descendants of those Hopevale survivors. His passages were written reverently and with a familiarity having been there himself since his parents were Philippine missionaries in the 1950s. He had his own accounts of playing with the very real possibility of finding evidence of the war in their play grounds. Shockwaves from those times are still evident today.

More the 60 years after WWII, the US recognized Filipino veterans that fought with their soldiers in Bataan. In the 1940’s, they were promised full benefits if they joined the US army but that promise was rescinded by President Truman when he signed the Rescission Act. In 2009 President Obama signed a stimulus bill that released money appropriated to those veterans in recognition of their duties and their valor. According to CNN interviews, those that were still alive to receive the benefits were grateful and still patriotic.

While writing this review (and incurring library overdue fees), I found Dr. Walker through the bio on the book jacket cover and sent him a message. I told him how valuable this book was to me in connecting with the Philippines. I am or was what President Obama referred to as a “Dream Act Kid...without a country” (although at this point I am too old to benefit from the DREAM Act). I suppose now I have two countries. I feel it is my responsibility to have an understanding and an inherent patriotism to both my past and present. It is my hope that while it took Americans time to rescue their citizens in the Philippines and even longer to remember the Filipinos that fought with them during Bataan and Corregidor, that they will not forget inhabitants within their borders (here by choice, or at least by the choice of their parents and not under imperial mandate) as the political battle rages on about immigration. I will forever salute the DREAM Activists and hope that not only will they fall under the US Bill of Rights but that their government can behold them in the words of Thomas Jefferson, “we hold these truths to be self evident, that all men are created equal”.

Dr. Walker kindly responded to my message. He ended it by telling me to “never resist following your most compelling dreams and deepest passions.”